macOS 10.14 Wishlist: Features MacRumors Readers Hope to See in the Next Version of macOS

Apple is expected to preview the next-generation version of macOS, macOS 10.14, at the keynote event for the Worldwide Developers Conference, set to be held on June 4. Though the keynote is less than two weeks away, we've heard little about what we might expect to see in the new version of macOS aside from the possibility of cross-compatible Mac and iOS apps.

With so few rumors about macOS 10.14 available, we turned to the MacRumors community to ask our readers what they would like to see the most in the next version of macOS. 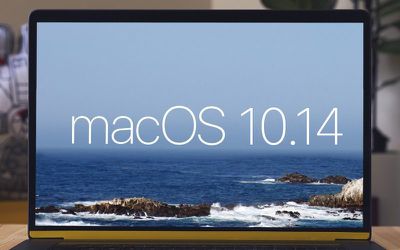 As with iOS 12, many readers listed performance and stability improvements at the top of their wishlists for macOS 10.14, and it's likely this is on Apple's to-do list as well. Apple is rumored to have delayed some macOS 10.14 and iOS 12 features to 2019 in order to focus on internal improvements following a slew of high-profile bugs that have impacted iOS 11 and macOS High Sierra.

What new features are you hoping Apple adds to macOS 10.14? Let us know in the comments. Make sure you check out our macOS 10.14 roundup for more on what we might see in the update, including possible naming choices. We've also got a separate iOS 12 wishlist that has a list of what MacRumors readers are hoping will come to iOS in 2018.

mattopotamus
Notification Sync! Nothing drives me crazy like having email notification badges and calendar reminders still showing on my Mac after I acknowledge them on my iPhone and vice versa until I click the app.
Score: 63 Votes (Like | Disagree)

definitive
I hope the unification between iOS and macOS does not happen. Many of the macOS apps are already lacking features compared to some of their Windows counter parts. Who would want further dumbed down mobile apps on their full-fledged computers?
Score: 49 Votes (Like | Disagree)

eeboarder
I'm getting tired of the iPad-ification of MacOS. Let it be a computer.
Score: 41 Votes (Like | Disagree)

julsssark
Next generation Time Machine backups that won't corrupt over wifi to a NAS.

chucker23n1
* Sync iOS/macOS notifications. iOS notifications already sync to the watch; why can't they show up on all devices?
* Stream iOS widgets to macOS's Today view. This may become less relevant if porting from iOS to macOS becomes easier, but right now, the disparity is unfortunate.
* Make network shares more reliable. This has been an issue since 10.0, and they've made tweaks here and there, but I still frequently run into weird glitches where stuff doesn't show, some process needs to be killed, I need to wait for a timeout, or whatever. This worked better in Windows 98.
* Speaking of which, one of the things Windows does that macOS (and Unix in general) does not is just treat a network share as a path. You don't have to actually mount it; you can just transparently access files from it. Having to mount and unmount is a weird 1970s'-era anachronism. This isn't a floppy disk…
* Make Console more useful again. Unified Logging is great on paper but has made tracking down problems so much harder since Sierra. Don't have Console running and recently had an issue? You're probably out of luck. Have Console running? Welcome to the firehose; good luck setting up appropriate filters.
* Make Continuity more reliable. My Watch unlock stopped working a few days ago. Why? Lord knows. Maybe it's because I tried a screensaver; that's when I first noticed. But I have since shut that off again. Universal Clipboard works 80% of the time. Handoff works 60% of the time. Stuff is amazing when it works, and infuriating when it does not. Give use better diagnostic tools (such as a useful Console!) to figure out why stuff isn't working.
* Sometimes, my Watch shows up in Console. I've never gotten that to work, ever. It either claims after several minutes of spinning that I need to confirm the trust prompt on the Watch (I'm not getting one!), or it just shows an empty log. Always. No matter what I do or don't do on the Watch. (Meanwhile, the iPhone is rather chatty even when idling, so this isn't plausible.) Continuity's fault? Who knows.
* Let me backup from iOS to macOS Server.
* Mail still occasionally has a hard time counting. Title bar says x items unread, Dock icon says y items, and actual mailbox shows zero items.
Score: 16 Votes (Like | Disagree)
Read All Comments