Apple today sent press invites to a variety of news and media sites for the upcoming 2018 Worldwide Developers Conference, confirming the company's plans to hold a keynote event on Monday, June 4 at 10:00 a.m. Pacific Time. MacRumors will be in attendance at the keynote.

It is tradition for Apple to hold a keynote event on the first day of the Worldwide Developers Conference to introduce new software and hardware products. This year, we expect to see new versions of iOS, macOS, tvOS, and watchOS at the conference, and it's possible Apple will also use the event to unveil new iPad Pro models and new Macs. 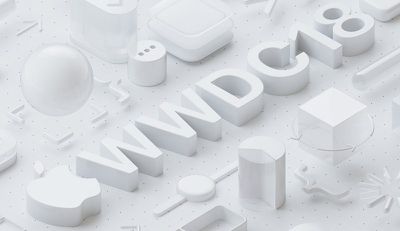 Apple is rumored to be working on an updated iPad Pro that features an iPhone X-style edge-to-edge display with no Home button and support for Face ID. It's not clear, however, if this device will be ready to debut at WWDC as rumors have said that it may not come until later in the year. Apple often introduces refreshed Macs, and the iMac, MacBook Pro, and MacBook are all awaiting 2018 refreshes.

It's also possible Apple will use the WWDC event to launch the long-awaited AirPower, a charging mat that's designed to charge iPhone X, 8 and 8 Plus models at the same time as the AirPods (with a new charging case) and the Apple Watch Series 3.

Apple in March announced that this year's Worldwide Developers Conference will once again be held at the McEnery Convention Center in San Jose, California. This is the second year that Apple has hosted the event in San Jose, a location that's closer to its two Cupertino campuses and the myriad other office buildings the company occupies in the South Bay. Past conferences were held at Moscone West in San Francisco.

WWDC tickets, which were priced at $1,599, were distributed to developers by random selection back in March. Apple also provided 350 scholarships to students and STEM organization members, which include a free ticket to WWDC as well as free lodging at San Jose State University.

Approximately 5,000 developers attend the Worldwide Developers Conference to interface with hundreds of Apple engineers who are available to answer questions and host development sessions. Developers who are not able to attend the event will be able to watch the sessions through Apple's WWDC 2018 website or the WWDC app for iPhone, iPad, and Apple TV.

For Apple's June 4 keynote event, MacRumors will provide live coverage, both here on MacRumors.com and on our MacRumorsLive Twitter account. We'll also have detailed coverage of the new software Apple debuts as well as anything else Apple announces during the week.

decimortis
Maybe we'll hear something about the Mac mini.
I know it's long shot since it was just updated 4 years ago.
Score: 36 Votes (Like | Disagree)

TheFluffyDuck
If it's more emojis, I will be looking for the door. Siri is a joke, half their computer line either hasn't been updated for years or barely gets a bump worthy the name. Most of their accessory hardware is now discontinued (with the exception of dongles of course). I could go on. But time for Apple to pull a rabbit out of the hat to prove they are still in the innovation game.

Apple has thrown in with AR technology, but haven't brought anything to the table themselves in terms of interface or apps; just hoping developers will fill the gap. Such a wasted opportunity. Apple has thrown in with the home automation scene but only offering an API kit. There is SOOOO much potential for them to doing something innovative with hardware again or software. But all they do is let any technology they develop stagnate once invented and push out more emoji.
Score: 21 Votes (Like | Disagree)

Tig Bitties
iOS 12 needs to do this;

- Create an AoD ( Always on Display ) type of thing for the OLED iPhone's. Right now if your leave the room with your phone on the desk, and come back, walking next to the phone, you have no idea if you have a missed call or missed e-mail, text, etc... you have actually activate the screen yourself by either Face ID or Touch ID to check. But with AoD it would be so much convenient and nicer.

- Revamp the UI already, the homescreen with the grid of icons, is so 10yrs ago. Allow me to place an icon anywhere on the screen I want, like the bottom of the screen, don't force icons to all be bunched in a row one after the other starting from the top, let me choose where I want my icons to be on the screen. Allow some basic dark themes, allow icon packs.
Score: 12 Votes (Like | Disagree)

dweezle3
Nice looking invite! Wonder if it’s hinting at a design refresh? In any case, it’ll be nice to have a smarter Siri, that’s long overdue.

Maybe we'll hear something about the Mac mini.
I know it's long shot since it was just updated 4 years ago.

I made a Mac Mini hackintosh in November because I was sick of waiting on Apple to update it; and it's been working perfectly.
Score: 9 Votes (Like | Disagree)
Read All Comments