Wi-Fi Alliance today announced a new certification program called "EasyMesh," which will allow users who own mesh network products to choose from devices across different brands, while still ensuring reliable Wi-Fi coverage (via PCWorld). This way, customers will no longer need to stay within a single-vendor ecosystem dictated by the brand of the hub router, and can branch out to add on access points to their network that might have better performance, or other advantages.

So with EasyMesh certified products, if you own a Linksys Velop router then you can extend coverage across your home using a Netgear Orbi access point. Right now, users can only add products onto mesh networks that work with the main network gateway. For EasyMesh, the limitation as of now is company adoption, so users will have to wait for each mesh system maker to introduce EasyMesh compatibility into their devices. 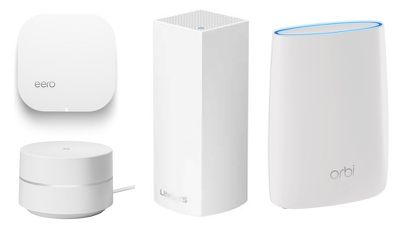 According to Wi-Fi Alliance marketing vice president Kevin Robinson, EasyMesh is implemented in software, "so there should be no need for new hardware," which could speed up adoption rates. Still, Robinson pointed out that it will be up to each company to decide about adding EasyMesh into existing products. He also stated that companies will also be able to "differentiate their products with unique features or performance" and went on to break down the main components of EasyMesh.

In the announcement, the Alliance described EasyMesh as a system that will be familiar to any mesh network user. The program monitors network conditions and "self-adapts as needed," and it can guide internet-connected devices to the optimal access point in order for the user to have the best possible connection. Of course, the main advantage is that EasyMesh accomodates Wi-Fi extending access points across various brands, making the creation of an in-home Wi-Fi network far easier.

Mesh networks have become increasingly popular over the last few years, thanks to their ability to easily extend Wi-Fi signals throughout a home. Some well-known brands include eero, Linksys Velop, Google Wi-Fi, Luma, and Netgear Orbi, which just announced a new 2-in-1 modem router system earlier this month.

Apple itself never offered a Wi-Fi mesh system, and the company officially got out of the router market completely in April with the discontinuation of the AirPort Express, AirPort Extreme, and AirPort Time Capsule. As an alternative Apple sells the tri-band Linksys Velop system on Apple.com, and the new dual-band system will be launching tomorrow, May 15, although it's still unclear if it will also be up on Apple's website.

Check out our full review of the dual-band Linksys Velop for more information on the company's latest Wi-Fi product.

anthonymoody
Still happily chugging away with my Airport set up, though when it dies I'll probably move to Orbi.
Score: 2 Votes (Like | Disagree)

As prior poster notes, your info is out of date here.

err404
I assume that this does not include tech like Orbi. While they are good at what they do, they are not really mesh networks. Orbi is a glorified router/AP typology. Meaning your satellites can only talk to the router, so Orbi does not allow a satellite to be more than one hop from your router.
Score: 1 Votes (Like | Disagree)

OMG. Parts of this article are plagiarized from PCWorld, and it creates quotes that don't even exist in the source article.

Both quoting from the same press release I’d imagine...

pika2000
Sure... and no OEM will adopt it. Seriously, who would adopt something that will let competitors steal your customers? The WiFi alliance should make it a requirement to be part of the actual WiFi certification instead to see adoption.
Score: 1 Votes (Like | Disagree)
Read All Comments