Apple has officially ended development on its AirPort line of products, which includes the AirPort Express ($99), the AirPort Extreme ($199), and the AirPort Time Capsule ($299).

"We're discontinuing the Apple AirPort base station products. They will be available through Apple.com, Apple's retail stores and Apple Authorized Resellers while supplies last," an Apple spokesperson told iMore. 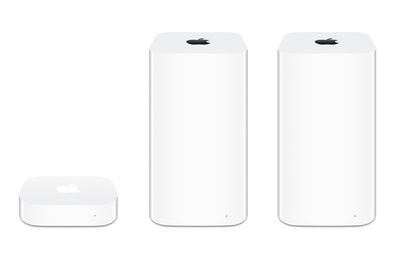 Apple has not updated its AirPort products since 2012 (Express) and 2013 (Extreme and Time Capsule), and in late 2016, Bloomberg said that Apple had stopped development on the AirPort lineup with the AirPort engineers reassigned to other products.

Apple reportedly began shutting down its AirPort unit in early 2016, in an effort to "sharpen" its focus on the "consumer products that generate the bulk of its revenue."

Following news that Apple had shuttered the AirPort unit, the company began selling third-party routers in January of 2018 when it offered the Linksys Velop Mesh Wi-Fi System.

Apple's AirPort base stations provided unique benefits that are not available through third-party options like built-in Time Machine backup support in the Time Capsule and AirPlay functionality for the AirPort Express.

While the AirPort line is being discontinued, Apple will be providing service and parts for current generation AirPort Base Stations for the next five years. iMore says Apple also plans to share some knowledge-base articles in the coming weeks to assist customers who are transitioning away from the AirPort Express, Extreme, and Time Capsule.

Apple plans to continue to sell the three AirPort products online and in its retail stores until available supplies are exhausted. No price drops have been implemented at this time.

Update: Apple has shared a new support document offering tips on choosing a Wi-Fi router to use with Apple devices. The company recommends a router that offerrs 802.11ac, dual-band support, WPA2 Personal encryption, and MIMO or MU-MIMO.

km9898
This company loves destroying everything that got them to the top.
Score: 240 Votes (Like | Disagree)

Do people seriously believe AirPort “got [Apple] to the top”?

No - but what got Apple to the top once was the eco-system. If I purchased a MacBook Pro in 2012 I could get a MacBook Pro with Magsafe (I could see if my battery was charging or not + magnet for safety), I could charge my iPhone with the USB ports, I could buy an Apple Display to hook up with my MacBook Pro and also buy a AirPort Extreme to get my network set up in literally 10 minutes. That took Apple to the top.

We don't have that anymore, any of it actually.
Score: 112 Votes (Like | Disagree)

bladerunner2000
They kill this, one of their better products, but continue to sell hot garbage like Mac Mini, Homepod, Watch and the outdated, overpriced and unupgradeable Mac Pro?
Score: 91 Votes (Like | Disagree)

MarkJames68
Disappointing but not surprising. While not the "best" anymore they are still the easiest to use if you have an Apple-heavy ecosystem.
Score: 76 Votes (Like | Disagree)

camomac
This makes me a little sad.
The AirPort Express was nice to use with satelite speakers.
Score: 69 Votes (Like | Disagree)
Read All Comments