Apple has begun inking deals with publishers in Apple News to gain timed exclusive video series on the platform, as it competes with news distribution outlets on Facebook, Google, and Twitter. In a new article today, Digiday highlights BuzzFeed News as one of the first major partnerships for the video initiative on Apple News, with the debut of docu-series "Future History: 1968" last month.

Under the partnership, BuzzFeed News launched the first three episodes of Future History: 1968 exclusively on Apple News, and then one week later expanded them to Facebook Watch, YouTube, Twitter, and the BuzzFeed app. BuzzFeed head of audience development Roxanne Emadi says Apple paid the publisher for first-window rights to the show's first three episodes and cut BuzzFeed a share of ad revenue. 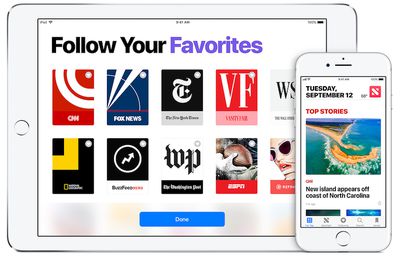 Apple has become so serious about competing with Facebook, Google/YouTube and Twitter as a distribution outlet for news publishers that it’s paying publishers to unveil shows on Apple News first.

“We’re focused on really just in-depth, unique video experiences and finding partners to support that,” Emadi said. “It’s very different than what you’re used to, which is social video and news feed video.”

After its launch on April 21, Future History: 1968 was featured in video galleries for an entire weekend on Apple News and got included in push notifications of users that follow the publisher in the app. According to Emadi, during the first week of the show's availability on Apple News it received "several hundreds of thousands" of views across the three episodes. On April 28 the show launched on YouTube, Facebook Watch, and Twitter, amassing over 110,000 views across all three since then.

The show focuses on major events that happened in 1968, including the assassination of Martin Luther King Jr. and the space race, but the depictions of each event are filtered through a modern lens. For example, conversations between King and his wife are shown visually as a text message thread. The episodes are mostly formatted in a vertical orientation to fit on iPhone screens without having to transition into landscape mode, and the shortest one runs at just over eight minutes.

Apple has been working on beefing up Apple News recently, with a report last month suggesting that the company will introduce a subscription-based plan into Apple News within the next year. The company has also been pushing for higher-quality and lengthier video series on the platform, although publishers are said to remain hesitant as the app "hasn't delivered on the revenue front."

Limited revenue and hassles with placing ads alongside content are some of the reasons that publishers are reluctant to adopt Apple News. This could change, as Apple reportedly plans to allow publishers to use the ad tech they already employ on their sites, such as Google's DoubleClick for Publishers, to deliver third-party ads in the Apple News app. For publishers embracing the app, they have noted that Apple News can yield a flood of traffic to articles, with Vox.com stating in February that Apple News accounted for as much as 60 percent of traffic for some stories.

So Apple is serious about Apple News? Maybe it would help to introduce it outside the U.S. or UK...

If Apple were truly serious about news their first partnership on something like this wouldn't be with Buzzfeed.
Score: 7 Votes (Like | Disagree)

Mike MA
So Apple is serious about Apple News? Maybe it would help to introduce it outside the U.S. or UK...
Score: 5 Votes (Like | Disagree)

78Bandit
I detest content exclusives tied to hardware. Feels like a very underhanded approach to coerce people to subscribe to yet another platform. You want to read this story from People Magazine? Guess what, not only do you have to be a subscriber to the magazine service you also have to be a subscriber through this particular hardware vendor and have their device to view it. Got a subscription you can use on Android? Tough, you've also got to subscribe directly through Apple and have an Apple device too if you want this particular content.

I'm on the border with first-party content creation by hardware vendors. Apple's recent deals to make original video series is their prerogative, but ultimately I think it harms consumers by forcing multi-level lock-ins to view content. In a perfect world content creators would license their product across all distribution platforms and give consumers the widest range of options that fit their needs to purchase it.

This is just another way corporations are trying to stop the "cord cutters" who used to be able to consolidate their content consumption down to only what they wanted to view and pay for. We are rapidly heading back to massive quantities of required content purchases that consumers have no interest in just for the sake of getting the individual shows they do want. It is bundled cable all over again.
Score: 5 Votes (Like | Disagree)

Buzzfeed, aside from some of it's clickthrough tactics, is a serious news organization.

So they would like us all to believe. But you go to their front page and you find....

Large proportion of iPhone sales are not in the US. Apple should break out of their US bubble and recognise the rest of world. There is more than US mainstream media rubbish. There is a whole interesting world out there with differing points of view. No doubt its just easier to deal with the US after all Apple is in the US.

People here love to say "Apple is ignoring us," as if it's somehow intentional and should be insulted. No thought seemingly goes into these comments that maybe Apple is working on expanding to new markets but that there are lots of wheels and gears to maneuver in every unique market which make it difficult to have worldwide launches of products that require Apple recruiting sources and signing licensing agreements. Why would Apple not like to have all it's services available in all it's markets? Money is money.

Also It's quite common for companies to launch products in their home country to get out the kinks before going international. Spotify, as example, was available in Europe long before the U.S.