Apple News can yield a flood of traffic for news publishers, with the app accounting for as much as 50 to 60 percent of readership for some stories, according to a paywalled report by Tom Dotan for The Information. 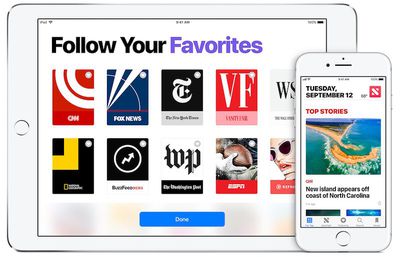 Apple News has generated half of Vox.com's daily traffic at times, according to a person familiar with Vox's numbers. An executive at the website of a major TV network said Apple News has accounted for as much as 60% of traffic for some stories.

The report claims Apple has an editorial team of about a dozen former journalists, led by veteran Apple executive Roger Rosner, who decide which articles get featured in the Top Stories or Spotlight sections of Apple News, or in the News tab on an iPhone, accessible by swiping left from the first page of the home screen.

The editorial team in the United States runs a dedicated Slack channel in which publishers can pitch stories to Apple, which tends to favor big breaking stories, special features, and multi-part series, according to the report. Apple is said to have similar teams working with publishers in Australia and the United Kingdom.

The curation process isn't praised by all publishers, as smaller to medium-sized sites say Apple News tends to favor big mainstream outlets, which get featured prominently when users first sign up for Apple News.

A bigger issue that publishers have with Apple News is that many don't earn any significant ad revenue from the app.

Part of the problem relates to how it sells ad space next to stories. Apple initially used its ad team iAd, but it later outsourced sales to NBC. It has yet to integrate Google's industry standard ad-serving tool DoubleClick, which publishing executive say would make ad sales much easier.

This may change soon, as Apple has supposedly begun to run a closed test of Google's industry standard ad-serving tool DoubleClick with around 20 publishers, in line with a report from last July. However, it's unclear when or if Apple News will roll it out wider, according to the report.

All in all, while Apple News has proved more successful than first expected, there is still some progress to be made as Apple aims to become a key distribution outlet for news publishers around the world.

Stridder44
My only complaint with Apple News is the lack of a macOS application. I enjoy reading it on my iPad, but I'd love to have the same ability on my MBP.
Score: 12 Votes (Like | Disagree)

That would be horrible news, especially for a company that prides itself on privacy, consumer protection, and anti-tracking technology (in Safari).

Agreed, this instantly came to my mind as well, I don't want google to infest my iPhone.
Score: 7 Votes (Like | Disagree)

That would be horrible news, especially for a company that prides itself on privacy, consumer protection, and anti-tracking technology (in Safari).
Score: 6 Votes (Like | Disagree)

I read articles through Apple News every day and really appreciate the ability to choose the content sources and themes I want to read. Are there ads? I'm so trained to ignore them that if there are ads I clearly don't notice them. I even let Fox News content show up because it's so damn amusing and who's doesn't the occasional SMH moment? No offense to Fox News readers, you probably feel the same way about CNN. But thanks to Apple News I've discovered news sites I didn't know existed before and I will visit those sites as well for additional content.

Regardless of what you think of Fox versus CNN, the ability to not just read things you agree with is a sign of maturity. Something a large portion of the population (on all sides) could use a bit more of!
Score: 5 Votes (Like | Disagree)

GrumpyMom
The algorithms on Apple News are a lot better than what I was dealing with on Android. On HTC 10 I was fed a constant stream of horrific news about murders and violence and tabloid style news. I have no idea what I must have looked at or clicked on but I was also endlessly treated to a stream of bizarre news about a planet full of demons that was going to enter our solar system (the date keeps moving) and destroying us all.

I was so happy to get back to Apple News when I switched from my HTC 10 to my iPhone SE. The HTC 10 was one of my top five favorite phones but the news on it nearly made me need therapy. :p

I have many, many criticisms of Apple services but Apple News is not one of them. I do not fault them for the abysmal state of news these days.

As a political moderate who tries to keep an open mind, I do find the state of accuracy and objectivity in news reporting absolutely appalling. I’m old enough to remember it was never perfect, but it did really used to be better than how it currently is.

Through my husband’s industry contacts we get to find out the REAL state of a lot of things and the major news organizations on both sides of the political spectrum have so many things so wrong.

This is the one tiny area where I lean toward the conspiracy theory side of news and wonder if it’s just down to a small handful of extremely wealthy and powerful people on opposing sides using their wealth and influence to manipulate us all.

Because the news really is so badly skewed in so many areas from economics to oil to the environment and don’t even get me started on social engineering on both sides. If it were really about informing people, even for profit, the style of reporting would not be so inflammatory. Doctors make an effort to be neutral to their patients. I would have thought it would be a matter of professional pride for journalists to be neutral at least some of the time, but almost all news is heavily editorialized now.

I’m ever so grateful that for the most part, when I step away from the internet and talk to people in the real world usually things are so much more functional and positive than the news would lead us to believe. The only time I have a problem is when I’m dealing with people who have let themselves be manipulated by the news.
Score: 4 Votes (Like | Disagree)

anson42
I read articles through Apple News every day and really appreciate the ability to choose the content sources and themes I want to read. Are there ads? I'm so trained to ignore them that if there are ads I clearly don't notice them. I even let Fox News content show up because it's so damn amusing and who's doesn't the occasional SMH moment? No offense to Fox News readers, you probably feel the same way about CNN. But thanks to Apple News I've discovered news sites I didn't know existed before and I will visit those sites as well for additional content.
Score: 3 Votes (Like | Disagree)
Read All Comments