Apple has given a series order for 10 episodes of "Are You Sleeping," a drama series that will star Octavia Spencer, who is known for her work in movies that include "Hidden Figures," "The Help," "Gifted," and "The Shape of Water."

News of Apple's work on "Are You Sleeping" first surfaced in January, but now Variety says the company has decided to move forward with production on the show. 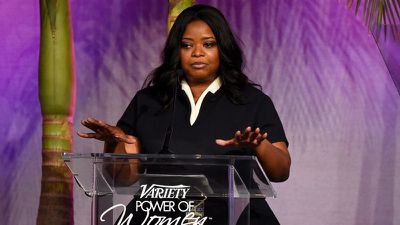 Image of Octavia Spencer via Variety
"Are You Sleeping" is based on a novel by Kathleen Barber, which has been described as a psychological thriller. The book focuses on a podcast that reopens a murder case, similar to the popular "Serial" podcast that led to a new trial for Adnan Syed, in jail for allegedly murdering a former girlfriend. Sarah Koenig, who created and produced "Serial," will consult on "Are You Sleeping."

The novel the TV show is based on explores how the reopening of the murder case impacts the victim's daughter and disrupts her life, and it's likely the TV show will follow a similar plot.

Apple is also working with Reese Witherspoon's production company on an as of yet untitled "morning show drama" that takes a look into the cutthroat would of morning TV.

Apple now has more than a dozen television shows in the works, with a full list of what's on the horizon available in the original content section of our Apple TV roundup.

It's not yet known when the first of Apple's TV shows will debut nor how they'll be distributed, but rumors have suggested we could see the first fruits of Apple's efforts in 2019.

Nunyabinez
"Are you sleeping" The tragic story of how Tim Cook fell asleep at the Mac wheel and drove it into a ditch.
Score: 40 Votes (Like | Disagree)

trip1ex
I think apple’s foray into video will make me puke.

PBG4 Dude
So I’m guessing this is why we can’t have nice routers anymore.
Score: 21 Votes (Like | Disagree)

Diamond Dog
I don't know of anybody who's asking for this.

idunn
Where is the Mac Pro?
Score: 13 Votes (Like | Disagree)

scottcampbell
Exactly what the MacRumors readerbase has been clamoring for!
Score: 12 Votes (Like | Disagree)
Read All Comments

Saturday February 4, 2023 10:05 am PST by Eric Slivka
Online retailer TigerDirect has slashed pricing on the M1 iPad Air in several colors, offering the base 64GB configuration for just $313.99 in Purple and Pink. Note: MacRumors is an affiliate partner with TigerDirect. When you click a link and make a purchase, we may receive a small payment, which helps us keep the site running. That's a savings of 48% compared to Apple's normal $599.00...
Read Full Article • 387 comments

Sunday February 5, 2023 6:07 am PST by Joe Rossignol
Apple has discussed selling a new top-of-the-line iPhone alongside the Pro and Pro Max models in 2024 at the earliest, according to Bloomberg's Mark Gurman. Based on this timeframe, the device would be part of the iPhone 16 lineup or later. In a September 2022 edition of his weekly "Power On" newsletter, Gurman said there was "potential" for an iPhone 15 Ultra to replace the iPhone 15 Pro...
Read Full Article • 385 comments