A new supply chain report out of Taiwan echoes a recent Bloomberg News story suggesting that HomePod sales have been lackluster, but as with most channel checks, it can be difficult to draw accurate conclusions. 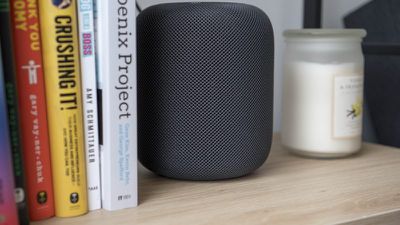 HomePod sales may very well be lackluster, as a relatively niche product with an expensive $349 price tag, and given a handful of early reviews that criticized Siri's capabilities, but Apple CEO Tim Cook has previously warned against trying to interpret single data points from the supply chain.

I suggest it's good to question the accuracy of any kind of rumor about build plans. Even if a particular data point were factual, it would be impossible to interpret that data point as to what it meant to our business. The supply chain is very complex and we have multiple sources for things. Yields can vary, supplier performance can vary. There is an inordinate long list of things that can make any single data point not a great proxy for what is going on.

For example, the China Times report only mentions Inventec and a few smaller suppliers affected by the cuts, despite reports that Foxconn would begin assembling HomePods alongside Inventec at some point in 2018. It's possible that Inventec has simply lost a portion of its orders as Apple diversifies its production.

A few months have passed since the HomePod launched, too, so early adopters who were eagerly waiting to purchase the speaker have likely already done so. Just like an iPhone, sales can be expected to be strongest within the first few weeks of availability, followed by a gradual decline over time. Production cuts are to be expected.

Moreover, the HomePod has yet to even launch outside of the United States, Australia, and the United Kingdom, so sales remain limited geographically. Apple said the speaker will launch in France and Germany later this spring.

If sales are in fact poor, one way that Apple could boost interest is by offering a more affordable HomePod, and today's report echoes rumors about a possible lower-priced version. However, the report predicts that Apple wouldn't launch a revised or cheaper HomePod until at least the fourth quarter of this year.

We'll likely never know exactly how well the HomePod is selling, as Apple said it will group the speaker under its "Other Products" category in its quarterly earnings reports, alongside the Apple Watch, Apple TV, AirPods, Beats, iPod, and more. But we'll be listening to the May 1 earnings call for any potential hints.

robertcoogan
I think much of the smart speaker "phenom" is overrated. I don't want to talk to my home, and I am sure most others don't want to as well.
Score: 39 Votes (Like | Disagree)

Siri can’t even set two timers at once on the thing haha
Score: 24 Votes (Like | Disagree)

4jasontv
meh. I hate talking to my machines. It’s not that they don’t understand, it’s that it feels so disruptive. If I ask her to shut off a light, just do it. We aren’t dating. You don’t need the final word.
Score: 20 Votes (Like | Disagree)

zorinlynx
This comment may make me unpopular here, but frankly I'm glad the HomePod is failing. It is a lackluster product, and Apple needs to stop relying on their logo and name to sell even crappy products.

If this had proper Bluetooth support, and a proper line-in, it would be an absolutely phenomenal speaker. I would have bought one on release day. However, the fact that my friends with Android devices of Windows PCs cannot connect to the HomePod to play music from their devices pretty much kills it for me.

I have a JBL speaker that supports AirPlay, Bluetooth, DLNA, TOSlink, and analog line in. It sounds great, and cost about the same as the HomePod when I got it a couple years ago. Apple should have at least lived up to something like that.
Score: 19 Votes (Like | Disagree)
Read All Comments