Apple Cuts HomePod Orders After Sales Prove to Be Lackluster

Apple's HomePod hasn't ended up selling as well as the company was hoping, leading it to cut orders with suppliers, reports Bloomberg.

In late March, nearly two months after the HomePod first became available for purchase, Apple reportedly lowered its sales forecasts and dropped some orders with Inventec, the company responsible for manufacturing the HomePod. HomePod inventory in retail locations is said to be "piling up" with some stores selling "fewer than 10 HomePods a day." 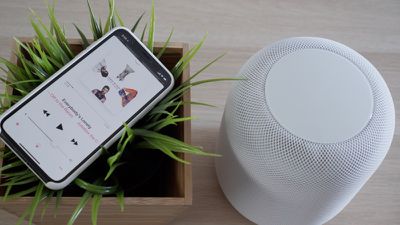 Early analyst estimates based on strong pre-orders and initial sales figures suggested the HomePod would sell well and capture a solid portion of the smart speaker market, but Apple hasn't managed to maintain sales momentum.

Apple charges $349 for the HomePod, making the device more expensive than competing smart speakers from Amazon and other companies. Apple put a lot of effort into promoting the HomePod's superior sound quality, but its high price tag, its lack of connectivity with non-Apple devices, and its inability to work natively with music services other than Apple Music have likely hurt its sales.

As Bloomberg points out, the HomePod's February launch was delayed from an initial promised December launch, causing Apple to miss out on key holiday sales.

HomePod also continues to lack promised features like stereo pairing to pair two HomePods together and AirPlay 2 support for controlling the music on multiple HomePods located in different rooms of the house. There are hints of this functionality in iOS 11.4, so these options could be coming soon, but HomePod owners and prospective buyers are likely disappointed with the months-long wait for basic features.

Apple isn't likely planning to give up on the HomePod despite its lackluster sales because it's part of an audio accessory lineup that includes the AirPods and the upcoming rumored high-end over-ear headphones.

Loup Ventures analyst Gene Munster in February said he expects sales to pick up later in the year. He predicts Apple will sell a total of 7 million HomePods in 2018, with that number set to grow to 10.9 million in 2019.

levitynyc
Everyone with a brain predicted this.

Being $100 overpriced will cause lackluster sales.

So will incompatibility and Siri. Just take Siri out back and shoot it.
Score: 166 Votes (Like | Disagree)

762999
It takes courage to release a product almost no one want while other products : mini, monitors, routers, mac pro are either cut or ignored.

OTACORB
Not mention a high return rate. I think people including myself got one. It was initially really sweet, but then it sinks in. I just spent $400 on a speaker with the tax and while it sounds great, what does it really bring to the table. Siri isn't that great. I ended up going with Echo Dot's connected to my JBL Xtreme's. One in my living room and one in my bedroom. I am happy. I think many have done this and decided this speaker just isn't worth the cost of admission.
Score: 63 Votes (Like | Disagree)

BWhaler
Apple’s crappy software is really starting to catch-up with them.

Wonder when Tim will wake up..This is his greatest failing as CEO.
Score: 57 Votes (Like | Disagree)

avanpelt
That's what happens when it's priced too high AND it still doesn't have features ready months after launch. Oh, and the primary way to interact with the device sucks.
Score: 49 Votes (Like | Disagree)
Read All Comments