Apple's second-generation iPhone X and so-called iPhone X Plus could be priced from $899 and $999 respectively in the United States, according to RBC Capital Markets analyst Amit Daryanani. 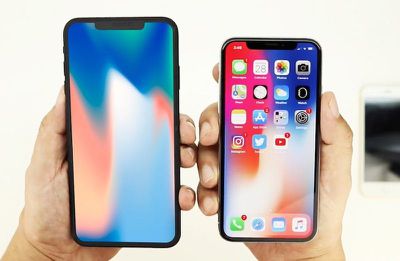 iPhone X and iPhone X Plus dummy models via Ben Geskin
Daryanani said the current iPhone X has experienced "limited success" at $999 and up, leading him to believe that lowering the base price by $100 could reinvigorate sales of the 5.8-inch model. A widely rumored 6.5-inch model, dubbed iPhone X Plus, would then fill the $999 price point.

While this is merely a prediction from one analyst, the strategy could make sense if iPhone X sales have slowed significantly, as a series of supply chain reports have suggested. We won't know for sure until Apple's next earnings report, likely to be released around late April or early May.

At this point, all we know is that the iPhone X was likely a key contributor to Apple's record-breaking revenue of $88.3 billion last quarter, easily topping its previous all-time high of $78.4 billion set in the year-ago quarter. Whether that momentum carried forward to the current quarter remains to be seen.

Based on Daryanani's research note, obtained by MacRumors, here's our take on how the next iPhone lineup could look in terms of pricing:

Here's a rough idea of how the next iPhone lineup could look if Apple maintains its current pricing strategy instead:

Apple will likely unveil its next iPhones in September as usual, and presumably only the company's top executives are privy to pricing plans.

User 6502
Apple must have realised that people are not willing to pay a four digit figure for a phone. Better later than never. Their arrogant strategy was punished by customers and the iPhone X basically flopped, which is good. I just feel sorry for all the iPhone X customers that basically paid an outrageous price just to be beta testers of an immature product.
Score: 28 Votes (Like | Disagree)

Apple must have realised that people are not willing to pay a four digit figure for a phone. Better later than never. Their arrogant strategy was punished by customers and the iPhone X basically flopped, which is good. I just feel sorry for all the iPhone X customers that basically paid an outrageous price just to be beta testers of an immature product.

Based on what? Musings from a Wall Street sell side analyst? Since Apple doesn’t disclose sales by model and fiscal Q2 results won’t be announced until early May nobody knows how well (or not) the X is selling besides Apple. And on the last earnings call Tim Cook said the X was Apple’s best seller every week since it had gone on sale. I think I’ll trust Tim Cook over a Wall Street analyst. What qualifies as news and rumors these days is complete garbage. Also just because some people think the X is too expensive or not a good product and want it to be a failure doesn’t mean it is.
Score: 24 Votes (Like | Disagree)

Ds6778
Remember when we used to make fun of other OEMs for having way too many options? I cant imagine what its like working at an Apple store and trying to explain which iPhone does what LOL 90s Apple called, it wants it product line back
Score: 22 Votes (Like | Disagree)

Chupa Chupa
I really don't see the point of a 5.8 AND 6.1 iPhone X even if they have different screens. Pick one Apple. You are just confusing consumers and then they don't make a decision to buy. Keep it simple if you really want to pay homage to Jobs philosophy. (And he was actually just borrowing it, but still good).

shareef777
A lot of people just look to buy their flagship device each year. But if that gets priced higher and higher, people will have to choose with spending even more money for their flagship or stick with their devices and not upgrade. $999 is a mental barrier that many simply won't go past.
Score: 21 Votes (Like | Disagree)
Read All Comments