1. Fitbit's financial chief knocks the Apple Watch: "I have yet to meet anyone who owns an Apple Watch who's passionate about the product," said Fitbit's chief financial officer Bill Zerella. "If you don't have an Apple phone, you're not buying an Apple Watch… 80% of the world is Android, not Apple." 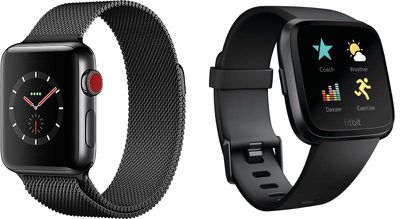 Apple Watch Series 3 and Fitbit's new Versa smartwatch
Commentary: Not only is the Apple Watch the world's most popular smartwatch, but it's the best-selling wearable, ahead of Fitbit. Apple Watch also has a customer satisfaction rate well above 90 percent.

2. iHeartMedia has filed for Chapter 11 bankruptcy protection: The company operates Apple Music rival iHeartRadio, which provides free streaming of thousands of live radio stations in the United States, Canada, Australia, and New Zealand. The move will allow the company to restructure more than $20 billion in debt.

Commentary: iHeartMedia's day-to-day operations of its businesses are not expected to be dramatically affected, according to reports, so iHeartRadio should remain available for at least the foreseeable future.

3. What the HomePod should become: MacStories' Ryan Christoffel argues that the HomePod isn't a bad product today, but could evolve into a great one by becoming a true hub for all Apple-centric needs.

If Siri knew all things about your Apple devices and services, and could interact with them all, then HomePod would be the perfect vehicle to tap into that power. You could ask Siri on the HomePod to:

- Check your iPhone's battery charge.
- Play an audiobook.
- Add a show to your Up Next queue.
- Download a specific app to your iPhone.
- Pause or resume Apple TV playback.
- List upcoming birthdays for your contacts.
- Provide a delivery status on your Apple Store order.
- Put all your devices in Do Not Disturb mode.
- Play a specific movie or show on the Apple TV.
- Or on the bedroom TV, or the iPad, or iPhone.
- Locate your iPhone or iPad.
- Each device could play a ding if it's nearby, and if not, HomePod could offer to load a map on your nearest device.
- Make a phone call.
- Switch your AirPods to the Apple TV.
- Set an Apple Store support appointment.
- Open an app on a certain device.
- Put a screensaver on the TV.

None of these things can currently be done by HomePod, but I think they would all be reasonable to expect from an upgraded Siri. None of these would infringe on the company's user privacy stance, because the data at play in these requests is already available to Apple.

Commentary: While the HomePod has received rave reviews about how it sounds, the consensus is that the speaker isn't as smart as the Amazon Echo or Google Home. Being able to complete these tasks would be a huge step forward.

4. Siri co-founder Dag Kittlaus responds to claim that Siri was a "disaster" when it first launched on iPhone 4s: "This statement, wholly false, was made by the architect and head of the biggest launch disaster in Apple history, Apple Maps. In reality Siri worked great at launch but, like any new platform under unexpectedly massive load, required scaling adjustments and 24 hour workdays."

This statement, wholly false, was made by the architect and head of the biggest launch disaster in Apple history, Apple Maps. In reality Siri worked great at launch but, like any new platform under unexpectedly massive load, required scaling adjustments and 24 hour workdays. — Dag Kittlaus (@Dagk) March 14, 2018

Commentary: "After launch, Siri was a disaster," said former Apple executive Richard Williamson, who was reportedly fired in 2012 following the botched launch of Apple Maps. "It was slow, when it worked at all. The software was riddled with serious bugs. Those problems lie entirely with the original Siri team, certainly not me."

sumisu3
Fitbit CFO needs to get out more
Score: 60 Votes (Like | Disagree)

Jeaz
Well, I haven't met anyone that owns a Fitbit, so don't know if they are passionate about them or not.
Score: 47 Votes (Like | Disagree)

jsalda
Then why does it seem I see Apple Watches everywhere?
Score: 40 Votes (Like | Disagree)

Shalev
ask me, in love with mine
Score: 18 Votes (Like | Disagree)
Read All Comments

Thursday September 29, 2022 12:38 pm PDT by Juli Clover
Tony Blevins, Apple's vice president of procurement, is set to depart the company after he made a crude comment about his profession in a recent TikTok video, reports Bloomberg. Blevins was in a video by TikTok creator Daniel Mac, who was doing a series on the jobs of people he spotted with expensive cars. After seeing Blevins in an expensive Mercedes-Benz SLR McLaren, Mac asked Blevins what ...
Read Full Article • 718 comments