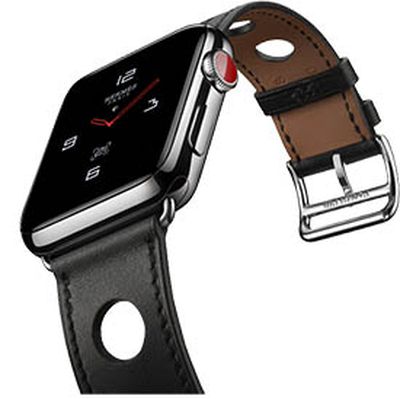 Apple Watch continues to be the world's most popular smartwatch by a significant margin, according to analysts.

The research firm says one in every five wearables shipped last quarter was an Apple Watch, on the strength of new Series 3 models launched in September.

By comparison, Fitbit reported sales of 5.4 million wearables last quarter, while Xiaomi shipped 4.9 million units over that time, according to IDC. An estimated 41 percent of smartwatch shipments came from smaller vendors grouped into an Others category.

The wearables market includes several inexpensive fitness trackers from the likes of Fitbit and Xiaomi, while the Apple Watch starts at $249 for Series 1 models, so it's really an apples to oranges comparison.

For that reason, MacRumors also reached out to IDC for data specific to smartwatches, which it defines as wearables that can run third-party apps natively.

The data shows that Apple Watch accounted for an estimated 61 percent of worldwide smartwatch shipments last quarter, with no single competitor coming anywhere close. Samsung's market share was just 8.4 percent, according to IDC, despite the quarter encompassing the lucrative holiday shopping season.

"Consumer preferences have shifted to more sophisticated devices and towards well recognized brands," like the Apple Watch, said Jitesh Ubrani, senior research analyst at IDC. "It's due to this that the wearables market has seen healthy double-digit growth in average selling prices since 2016."

Apple doesn't break out Apple Watch sales like it does with iPhones, iPads, and Macs. Instead, it groups the wearable under its "Other Products" category, alongside Apple TVs, AirPods, Beats, iPods, accessories, and soon HomePods.

On an earnings call last month, Apple CEO Tim Cook said the Apple Watch had its best quarter ever during the fourth quarter of 2017, with over 50 percent growth in revenue and units sold for the fourth quarter in a row, and strong double-digit growth in every geographic segment that Apple tracks.

Cook added that sales of Apple Watch Series 3 models were also more than twice as high as Series 2 models in the year-ago quarter.

Apple Watch shipments outpaced all Swiss watch brands combined for the first time last quarter, according to IDC's Francisco Jeronimo.‏ In other words, Apple is now the biggest watchmaker in the world.

dannyyankou
It's just a gimmick they said, it'll never take off they said
Score: 33 Votes (Like | Disagree)

It's just a gimmick they said, it'll never take off they said

Others said the same about the Airpods being a gimmick to, and look at the success of both of these products. The Apple Watch can only get better from here with health related advancements like glucose monitoring. This is just the start of what is to come for the Apple Watch future. It does so many things well already, but the health aspect of Apple Watch is a staple.
Score: 23 Votes (Like | Disagree)

It's just a gimmick they said, it'll never take off they said

Yep.. that’s how it has been since the first iPod Announcement :p
Score: 15 Votes (Like | Disagree)

nfl46
Apple has no competition when it comes to smartwatches and tablets.
Score: 11 Votes (Like | Disagree)

Not true. As an outdoors enthusiast, the Garmin Fenix watches are much better.

Can you elaborate why the Fenix is better? You telling another forum member “Not true” doesn’t explain your reasoning.
Score: 10 Votes (Like | Disagree)

Monday July 4, 2022 5:50 am PDT by Hartley Charlton
Apple is working on an Apple Watch Series 8 model with a larger display, according to DSCC's Ross Young and Haitong International Securities's Jeff Pu. In October last year, Young suggested that the Apple Watch Series 8 could come in three display sizes. Now, responding to a query about the rumor on Twitter, Young claims that the additional display size joining the Apple Watch lineup will be ...
Read Full Article • 154 comments

Wednesday June 29, 2022 5:23 pm PDT by Sami Fathi
The redesigned MacBook Air with the all-new M2 Apple silicon chip will be available for customers starting Friday, July 15, MacRumors has learned from a retail source. The new MacBook Air was announced and previewed during WWDC earlier this month, with Apple stating availability will begin in July. The MacBook Air features a redesigned body that is thinner and lighter than the previous...
Read Full Article • 324 comments