As reported last month, Apple is said to be developing its own brand of high-end, over-ear wireless headphones with an "all-new" design. The new headphones are expected to debut in the fourth quarter of this year at the earliest, according to KGI Securities analyst Ming-Chi Kuo, and today Bloomberg weighed in to corroborate that rumor, along with an additional detail regarding Apple's plans for the cans. 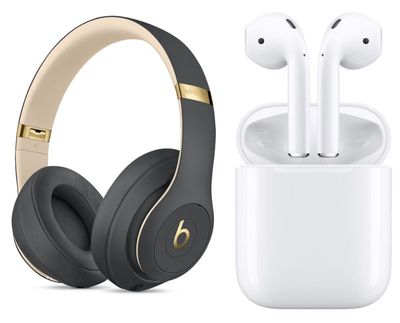 The Cupertino, California-based technology giant is working on noise-canceling, over-ear headphones that rival headsets from market leaders like Bose and even the company's own Beats by Dre brand, according to people familiar with the product's development. The company plans to launch the headphones as early as the end of this year, but has faced development challenges that might push back the release, the people said.

Whether Apple's own-brand ANC headphones will adopt the same set of technologies as Beats Studio3 cans remains unclear, although Bloomberg's sources indicate Apple plans to include similar wireless pairing functionality to the AirPods. The paper's sources also claim work on the headphones has been "on-and-off over the past year" and that it's still possible Apple will redesign the headphones again before launch – or even scrap the project altogether.

Another detail that remains unclear is pricing. Beats, Bose, and Sony charge $350 for their high-end wireless ANC headphones, while Sennheiser prices can run all the way up to $500. Should Apple take the same pricing strategy as it did with HomePod, which is at least $100 higher than the closest rival product from Sonos, then customers can expect the rumored headphones to be a top-tier premium audio accessory with a price tag to match.

Along with over-ear headphones, Apple is also reportedly working on several upgrades to its wireless AirPods with a new version of the popular headphones set for release as soon as this year.

asdavis10
I’m sure Apple believes they can walk and chew gum at the same time but how about they focus on their core products first.

iOS 11 has been a mess. High Sierra has had too many bugs. The Mac mini and Mac Pro are waiting for a refresh. The MacBook Pro needs to be rethought. No future development on AirPort products. No more Touch ID.

But somewhere was a group of people asking for Apple-branded headphones and Apple is about to deliver. I’m happy for those people.
Score: 42 Votes (Like | Disagree)

AngerDanger
Those wanting to get a taste of what Apple will be offering can simply wear two HomePods around their ears.

navaira
"High-End Noise-Canceling Market" is going to be my new favourite phrase.
Score: 15 Votes (Like | Disagree)

But somewhere was a group of people asking for Apple-branded headphones and Apple is about to deliver. I’m happy for those people.

Apple has become a poor imitation 'me-too' company, releasing boring, copycat products late to market and with over-the-top pricing to boot! I can just imagine them busy at work on a "magical" $49 mouse pad or some similar trifle.
Score: 13 Votes (Like | Disagree)

I’m sure Apple believes they can walk and chew gum at the same time but how about they focus on their core products first.

iOS 11 has been a mess. High Sierra has had too many bugs. The Mac mini and Mac Pro are waiting for a refresh. The MacBook Pro needs to be rethought. No future development on AirPort products. No more Touch ID.

But somewhere was a group of people asking for Apple-branded headphones and Apple is about to deliver. I’m happy for those people.