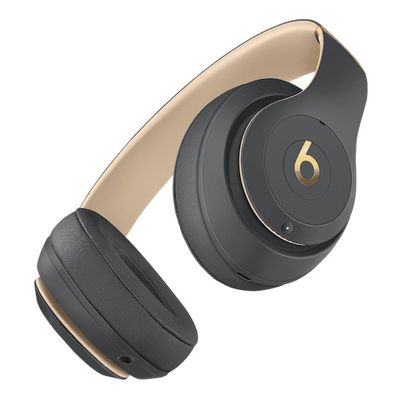 Beats Studio3 Wireless deliver up to 22 hours of battery life with Pure ANC on, and up to 40 hours with Pure ANC off. Fast Fuel quick charging technology via Micro-USB provides three hours of music playback with a 10-minute charge.

This groundbreaking new technology uses advanced algorithms to continuously monitor your listening environment, so that it can best block out ambient noise—not only on an airplane, but also in a noisy café or a busy office. Pure ANC also evaluates fit and adjusts for leakage caused by hair, glasses, different ear shapes and movement of your head as you go about the day. Additionally, Pure ANC simultaneously checks what you’re hearing while noise canceling is applied against the original music content to adjust and ensure optimal audio fidelity. What’s remarkable is that Pure ANC’s real-time audio calibration operates up to 50,000 times a second.

Like AirPods, Apple's W1 chip enables the Studio3 Wireless to instantly pair with an iPhone, iPad, Mac, or other Apple device, with seamless switching between iCloud-connected devices.


Apple's W1 chip has Class 1 Bluetooth, so the Studio3 Wireless can be used with non-Apple devices as well.

Beats Studio3 Wireless can be ordered on Apple's website starting today for $349.95 in the United States, $399.95 in Canada, and £299.95 in the UK. Prices vary elsewhere. Shipments are estimated to begin in mid October.

The headphones look virtually the same as the original Beats Studio Wireless, including soft over-ear cushions. There are six colors to choose from: Red, Matte Black, White, Porcelain Rose, Blue, and Shadow Gray.

Don't bother with these. Get the Bose QuietComfort 35 instead.

So, you've never heard these, but you are recommending against them? The QC35's are great, but keep an open mind. For example, the Sony MDR 1000X are rated as having better noise cancelling and better sound by most reviewers. They also have a lot more features. Sony, also just came out with next generation of these headphones. Bose tends to sit back and rely on its name and now that tech is improving rapidly, they appear to be falling behind, e.g., Beats, Sony and others are now incorporating more technology improvements, such as customizing NC to one's environment.
Score: 31 Votes (Like | Disagree)

Either Lightning or USB-C. Micro is just bizarre at this point.
Score: 28 Votes (Like | Disagree)

you gotta be f'n kidding me
Score: 25 Votes (Like | Disagree)

Don't bother with these. Get the Bose QuietComfort 35 instead.

So without ever hearing these perform, you already dismiss and recommend Bose? A bit ignorant and biased, aren't we?
Score: 18 Votes (Like | Disagree)