It's been just over one year since Fire Emblem Heroes launched on the iOS App Store in the United States, Japan, and over 30 other countries, and this week new data researched by Sensor Tower has titled the app as Nintendo and DeNA's "most successful mobile game to date." Over the course of its first year, Fire Emblem Heroes earned an estimated $295 million in player spending worldwide, helped by the game's free-to-play structure that includes in-app purchases of various items like game-boosting "Orbs."

The other Nintendo/DeNA apps include the soon-to-be-discontinued Miitomo, Super Mario Run, and the most recent game, Animal Crossing: Pocket Camp, which has earned about $20 million across the iOS App Store and Google Play Store in the two months since release. In comparison, Fire Emblem Heroes earned $86 million in its first two months after launch, following an initial slow start in the first few days. 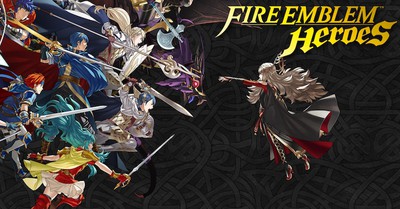 Nintendo’s Fire Emblem Heroes is the Kyoto-based gaming giant’s most successful mobile game to date, earning an estimated $295 million in worldwide player spend during its first year of availability, according to Sensor Tower Store Intelligence data.

With players worldwide continuing to spend more than $10 million per month on “luck of the draw” character draws, Fire Emblem Heroes is a clearly a financial success for Nintendo and DeNA. The question now is whether the publisher-developer duo can progress to the next echelon of mobile gaming revenue with future titles, including the recently announced Mario Kart Tour.

In terms of worldwide mobile game revenue, Sensor Tower reported that Fire Emblem Heroes ranked at No. 34 in January on the iOS App Store, while Animal Crossing: Pocket Camp sat at No. 190. Furthermore, Fire Emblem Heroes is said to have been successful both in the U.S. and Japan, with 30 percent of the game's first year revenue coming from the former country and 60 percent from the latter. For Animal Crossing: Pocket Camp, 13 percent of its revenue so far has been made in the U.S., and more than 82 percent comes from Japan.

Although the games support different payment structures, Sensor Tower compared Fire Emblem Heroes with Super Mario Run, which earned $56 million across its first year in worldwide revenue. Super Mario Run was a bigger hit initially as many players downloaded the game in the first few weeks of launch -- earning $8.4 million on its first day -- but slacked off in subsequent months. The game is free-to-download so that users can play the first few levels, but a $9.99 payment is required to unlock everything.

Chart via Sensor Tower
During Nintendo's quarterly earnings report last fall, the company admitted that Super Mario Run had "not yet reached an acceptable profit point" ten months after launch, while Fire Emblem Heroes was on track to meet its business and profit objectives. For Super Mario Run, the company stated that it had "learned a lot in terms of game development and deployment," which it will "take advantage of moving forward." Nintendo is also reportedly looking for new mobile developers to partner with in addition to DeNA.

While Fire Emblem Heroes has been successful for Nintendo and DeNA, it's still lagging behind the breakout hits on the iOS App Store, like Clash Royale ($967 million in first year worldwide revenue) and Niantic's Pokémon Go ($1.1 billion). Nintendo's next mobile game Mario Kart Tour will be free-to-start, which is terminology that Nintendo has used to describe the in-app purchase model of Animal Crossing: Pocket Camp. Previous rumors have also stated the company could be working on a smartphone game set in The Legend of Zelda universe.

Andronicus
Thank you to everyone who makes in-app purchases the norm.
Score: 2 Votes (Like | Disagree)
Read All Comments

Saturday May 30, 2020 4:00 pm PDT by Eric Slivka
Apple today doubled the price for upgrading the RAM on the entry-level 13-inch MacBook Pro, with customers in the United States now being charged $200 to move from 8GB to 16GB compared to the previous $100 upgrade price. Similar increases are seen in other countries, such as moving from €125 to €250 in Germany and from £100 to £200 in the United Kingdom. Current pricing on RAM upgrade for ...
Read Full Article • 300 comments

Monday June 1, 2020 7:50 am PDT by Joe Rossignol
If you are still hanging on to a Mid 2012 model of the 15-inch MacBook Pro with a Retina display, and require a new battery or other repairs, be sure to book an appointment with a service provider as soon as possible. In an internal memo today, obtained by MacRumors, Apple has indicated that this particular MacBook Pro model will be marked as "obsolete" worldwide on June 30, 2020, just over...
Read Full Article • 159 comments