Since being released yesterday morning for iOS and Android devices, Fire Emblem Heroes has been downloaded more than two million times from the iOS App Store and the Google Play store. Download numbers may have been affected by a late release in the United States - the game didn't become available on iOS devices until the afternoon.

At $2.9 million in gross revenue, Fire Emblem Heroes is not quite the hit that Pokémon GO and Super Mario Run were. Pokémon Go earned an estimated $10.2 million during its first 24 hours of availability, while Super Mario Run brought in $8.4 million. 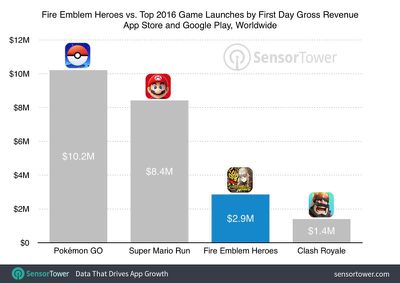 Unsurprisingly, Fire Emblem Heroes has proven to be most popular in Japan, with the United States coming in second.

Nintendo plans to continue releasing a steady stream of iOS games, with popular series Animal Crossing said to be one of the next games on the horizon. Nintendo originally said Animal Crossing would be released by March, but recently delayed the title until the following financial year, which runs from April 2017 to March 2018.

Fire Emblem Heroes can be downloaded from the App Store for free. It doesn't cost anything up front, but Nintendo makes money on the game through in-app purchases for speeding up gameplay. [Direct Link]

I can't wait for the Switch. I think it's going to do very well.
Score: 16 Votes (Like | Disagree)

i feel the same about apple...

or is it i just want apple to make hardware that runs android and windows...

the point is, i disagree with your point. Nintendo is one of the strongest game publishers on the planet. They are up there with EA and Activation in number of games published every year. Nintendo is great for the video game industry, because they drive innovation. Sony and MS and PC games don't.

If you want to play Nintendo games, get a 3DS. Otherwise, like Apple, go play with whatever else is around.

But don't wish they fail. If Nintendo fails, it will cause the whole industry to stagnate for a generation.

Just like the fact we are still using Windows 95, just with prettier graphics.
Score: 14 Votes (Like | Disagree)

Hahaha no
[doublepost=1486184020][/doublepost]The "I hope Nintendo fail" comments neves seizes to amaze me. People have been saying Nintendo was over for decades now and they always seem to make a comeback. Just look at this "amazing" prediction.

tonyr6
Nintendo needs to ditch hardware and go software only to succeed. I can't wait until there switch fails then they might wake up and stay with software.
Score: 9 Votes (Like | Disagree)

Nintendo's strength is it's games , not hardware.

But hardware is also very much is a strength of Nintendo... in the sense of their creativity and willingness to take risks (sometimes it pays off, sometimes not so much). They aren't about just taking the most advanced hardware and slapping it into a box and calling it a system like other vendors do.

Their hardware is innovative, look at how the Wii turned the industry on its head. 3D without the need for glasses or peripherals (3DS). Their controller design... look at the N64 and Gamecube. Look at the upcoming switch controls. There have been missteps along the way of course (Wii-U, Virtual Boy), but I guess it comes with taking risks.

The hardware is also robust. Even back to the days of the gameboy and NES you can still play these machines today. There are stories of people who dropped their system, lost their gameboy one winter out in the snow, and they still function come spring time.

I argue that the industry needs Nintendo, and not just as a game developer. They do have some of the best game IP out there; but, anyone that counts them out of the hardware race should be wary.