Apple shipped 29 million iPhone X devices in the fourth quarter of 2017, according to new research data shared today by Canalys. At 29 million devices shipped, the iPhone X was the "world's best-shipping smartphone model over the holidays." 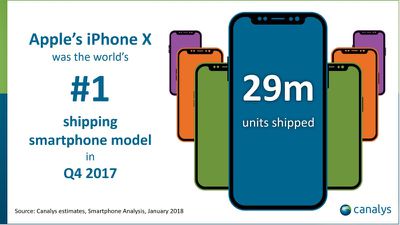 Canalys says that adoption was largely driven by upgrade demand in operator-centric markets like the United States where the installed base is high and customers can finance $999 cost of the device over many months. Apple was able to hit the 29 million number after a significant increase in production throughout November and December, with the company shipping out iPhone X orders earlier than expected and hitting supply/demand balance towards the end of the month.

"The iPhone X performance is impressive for a device priced at US$999, but it is slightly below industry expectations," said Ben Stanton, Analyst at Canalys. "Apple struggled with supply issues in early November, but achieved a massive uplift in production in late November and throughout December. This helped it meet and even exceed demand in some markets by the end of the quarter. One major benefit to Apple is that customers are increasingly realizing the residual value of their old smartphones, opting for trade-in programs to offset the high price of the iPhone X. But that big price tag, and Apple's split launch strategy, still had an impact, and shipments were not the fastest ever for an iPhone."

Of the 29 million iPhone X devices that were shipped in the fourth quarter of 2017, Canalys says seven million of those were shipped to China, a country where Apple has been aiming to increase growth.

Canalys says that along with the iPhone X, iPhone SE, iPhone 6s, iPhone 7, and iPhone 8 models also continued to "ship well" in Q4 2017, with the older smartphones remaining popular due to their lower price tag.

"Apple is looking at its best performance to date, all thanks to the massive changes it made to its portfolio in Q3," said Canalys Analyst TuanAnh Nguyen. "This strategy has hedged Apple's risk as it upgrades the iPhone, in both design and user experience. While new technologies, such as Face ID and bezel-less displays, help to justify the US$999 price tag and maintain competitiveness with Samsung, Huawei and Google, having a larger portfolio allows Apple to meet its overall shipment targets, and protect its market leadership in the premium segment."

Canalys' data is in line with other estimates that have suggested the iPhone X sold well -- though not as well as hoped -- during its first few months of availability. Consumer Intelligence Research Partners recently said that 20 percent of all iPhones sold in Q4 2017 were iPhone X devices, while 24 percent were iPhone 8 devices and 17 percent were iPhone 8 Plus devices.

Kantar Worldpanel said that the iPhone X saw "stellar" performance in several countries during its first month of availability, though it was outsold by the iPhone 8 and the iPhone 8 Plus. Combined, Apple's three new iPhones captured the top spots for best-selling smartphone models during the month.

Though Apple does not breakout iPhone sales on a model-by-model basis, we'll get a better idea of just how well the iPhone X sold when Apple announces its Q1 2018 earnings on Thursday, February 1.

Apple's guidance for the first fiscal quarter (fourth calendar quarter) of 2018 includes expected revenue of $84 to $87 billion and gross margin between 38 and 38.5 percent. It will be a record setting quarter even at the low end of the guidance range, as Apple reached just $78.4 billion in revenue in Q1 2017.

I'll take this notch (that I don't even notice anymore) in return for a screen that goes all the way to the bottom of the phone.

Anyone who still talks about the notch hasn't used an iPhone X. It's invisible after a day or two.
Score: 14 Votes (Like | Disagree)

Bawstun
By Apple standards, those numbers are a failure. Many many people did not upgrade to the iPhone X. That’s not a good sign or thing.
Score: 12 Votes (Like | Disagree)

Numbers I'd like to see:
• What percentage of Android phones in 2017 had no head phone jack
• How many of the same have tried to do their own version of AirPods
There's financial numbers and then there's the numbers that run against what the angry mob were shouting about this time last year.
Feeling sorry for them this year. All they seem to have is "that notch - I don't like that", "someone sez Apple is discontinuing the X". :)

For what purpose? To make some effort to prove a corporate decision right based on similar moves by competitors "we" typically refer to as stupid, crooked, copycats anyway?

As a consumer, I'd still like Apple to put the headphone jack back in. I still feel it's stupid:

* to need a dongle... OR
* that one set of buds can't work between iPhone and Apple Macs... OR
* using inferior quality bluetooth- while able to cover those 2 bases- generally can't connect to all kinds of other stuff (such as the seatback screens on ALL of the major airlines).

Worse, even if you get what I assume you desire- to see that a good number of Androids dropped it too- they are going USB3C, so basically their wired headphone options WILL BE MORE COMPATIBLE with Macs as plug & play, without needing a dongle.

All we consumers got out of jettisoning the headphone jack was a loss of consumer utility, fragmentation of audio connections and more to charge and keep up with in the travel bag. Those coveting Lightning or Bluetooth ALREADY had both when iPhones had a headphone jack. The headphone jack did not have to go to make AirPods possible. We simply lost something- a useful something- that is still embraced by Apple in all of their other hardware.

Lightning as a replacement audio connection has not been adopted by anything else mainstream. An expansion of Bluetooth connectivity doesn't seem any more accelerated than the general pace it was moving BEFORE Apple chose to go this way. All this time later, I fly and the only option to plug in to watch some live television is the good old headphone jack. Does anyone expect that very common use scenario to change to Lightning or Bluetooth in even the next 5 years?

iPhone 8 and iPhone X could have arrived WITH a headphone jack and not missed a beat. If either had to be a mm or two thicker to "create the space" for it, the rest of that extra space could have added some battery, perhaps reducing the need to inject secret throttling code to deal with the ramifications of "thinner" for the long run.

But let's look for ways to "I told you so" our fellow consumers unhappy about a very VERY common use utility getting stripped away from us for nothing (in consumer gain).
Score: 9 Votes (Like | Disagree)

DamoTheBrave
Great. Looking forward to the price dropping now that they've paid off their initial investment.
Score: 8 Votes (Like | Disagree)
Read All Comments

Friday August 12, 2022 12:46 pm PDT by Juli Clover
Samsung this week launched its fourth-generation foldable devices, the $1,000 Galaxy Z Flip and the $1,800 Galaxy Z Fold. Though there's no sign of a comparable Apple foldable device on the horizon, rumors suggest prototypes are in the works, so we thought we'd take a look at Samsung's newest smartphones to see what Apple needs to measure up to when a foldable iPhone does come out. Subscribe ...
Read Full Article • 260 comments