Kantar Worldpanel's newest smartphone OS data details the "stellar" performance of the iPhone X in multiple markets around the world during November, amid an overall "mixed performance" for iOS devices from September to November 2017. While Apple's piece of the smartphone ecosystem fell in Great Britain, the United States, Japan, and Australia, the company saw ongoing growth in urban China during this period. 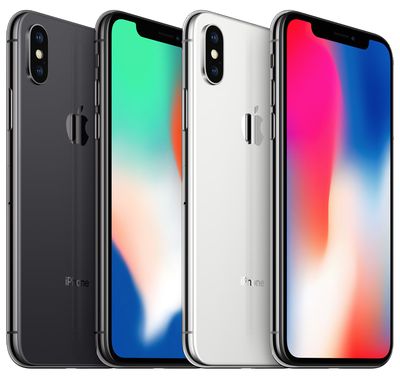 Kantar noted that in the U.S. the iPhone X was outsold by the iPhone 8 and 8 Plus in November, coming in third and helping Apple capture the three top spots for the best-selling smartphone models that month. The researchers said that Apple "easily" beat Samsung's Galaxy S8, which landed at sixth place.

Kantar Worldpanel global director Dominic Sunnebo explained that Apple's growth in China during this period was helped by "staggering" demand for the iPhone X, despite its high price tag, and came from users who were mostly switching sides from rival smartphone makers.

“Apple was riding on the back of some momentum before the iPhone X release but demand for latest model in urban China has been staggering given its price point.

“Apple is now back on form – the iPhone X was the top selling model in urban China in November, with a market share of 6.0%. Unlike in Europe and the US, where the vast majority of new early iPhone X sales came from existing Apple smartphone owners, in urban China there are significant numbers of Huawei, Xiaomi and Samsung customers switching to the new iPhone models, which they deem a cut above the rest.”

Despite an overall percentage point loss for Apple in Great Britain from September to November (down 4.2 points), Kantar said that for the month of November only, "Apple achieved its highest share in more than three years." The company reached 49.4 percent of the market in November thanks to iPhone X demand, beating out Samsung and "easily regaining" the number one sales spot for the month.

For most markets, Kantar wondered how long Apple will be able to keep its sales momentum going with the smartphone's high price tag. Numerous reports in recent weeks have discussed the same topic, with analysts predicting "weakened demand" in Q1 2018 now that early adopters have received their iPhone X.

ahireasu
So when in 8 out of 10 countries your sales drop is stellar?
Score: 38 Votes (Like | Disagree)

I love mine. I just wish it was bigger.

I heard people say that before in a different context.
Score: 14 Votes (Like | Disagree)

That's not to say they don't care at all about market share
But cash is king, and they are more concerned about making profit than saturating the market

But that's just me

And this, if true, is a worrying trend. As Steve Jobs once said:

“If you keep your eye on the profit, you’re going to skimp on the product. But if you focus on making really great products, then the profits will follow.”
Score: 12 Votes (Like | Disagree)

Baymowe335 ('https://forums.macrumors.com/members/baymowe335.1098461/') pointed my mistake that these were market shares. back to maths basics.
still 2/10 i reckon this article qualifies as biased.
Score: 10 Votes (Like | Disagree)

one more
To improve the market share Apple needs to wake up to the fact that a regular person needing a smartphone could be quite happy with a wide variety of Android handsets falling within the price bracket below 300$. There is just a bunch of hard core Apple fans who are ready to shell out over a 1000$ for a phone that will be outdated the following year. iPhone, after all, is merely a useful object, not a piece of art that gains extra value with time.
Score: 9 Votes (Like | Disagree)

Quality products - YES
Profits - YES
Market Share - not so much

This is wrong and revisionist. Jobs did care about market share. He cared about it as a part of an encompassing vision for success. He understood where it played a part. But don't take my word for it. Take his. Relevant portion from 38 min to 43 min. Fair warning, you'll probably end up wanting to hear everything he said.
Score: 7 Votes (Like | Disagree)
Read All Comments