Apple today updated its investor relations page to announce that it will share its earnings results for the first fiscal quarter of 2018 on Thursday, February 1. 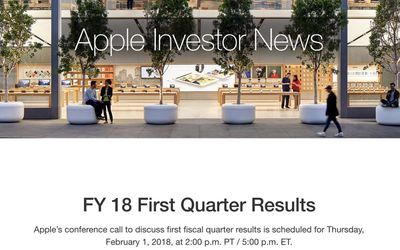 Guidance for the first fiscal quarter of 2018 includes expected revenue of $84 to $87 billion and gross margin between 38 and 38.5 percent. It will be a record setting quarter even at the low end of the guidance range, as Apple saw $78.4 billion in revenue in Q1 2017.

asdavis10
The numbers for Apple are just staggering at this point. No one can deny that.

But I’ll be listening out for a few things:

78Bandit
This will no doubt be a blowout quarter for Apple. I fully expect them to be at the upper end of the $84-$87 Billion estimated revenue. The iPhone X will have sold quite well as demand wasn't satisfied until very close to the end of December; basically they sold all they could make this quarter. This should drive average selling price and revenue well up compared to Q1 of last year.

What will be telling is the next quarter's estimates. Initial demand for the X has been met. The anticipated product shortages through the 2nd quarter aren't happening. I'm thinking demand for a $1,000 phone that appeals to people with discretionary income is going to be very heavily weighted toward the introduction date. You will still have the normal consumer purchases during the remainder of the year but I don't think the iPhone X will make up a significant percentage of sales.

My baseless prediction for 2nd quarter revenue estimates is $52 - $54 billion as the iPhone X supercycle plays out, unit sales continue to plateau at around 225 million annually, and the lower cost iPhone 7 models account for a higher percentage of the remaining sales until next year's models come out in September.
Score: 2 Votes (Like | Disagree)

DocMultimedia
Show me the dividend increase. And pretty guidance for next quarter.

I'm betting the iPhone numbers might not be as high as expected, but raw cash coming in from the App Store will be much higher than expected.

I'm not an analyst, but my guesses have a probability of being correct. :)
Score: 1 Votes (Like | Disagree)

4jasontv
I feel as though the rumors have given reason to think the iPhone X isn't doing well. While our expectations are low good numbers will look great. So, yeah, I'm sure numbers are fine.
Score: 1 Votes (Like | Disagree)

Monday November 28, 2022 10:42 am PST by Juli Clover
Apple has cut back on its Twitter advertising, according to Twitter CEO Elon Musk. In a tweet, Musk said that Apple has "mostly stopped" its Twitter ads, asking if Apple hates "free speech." Musk went on to publish a poll asking if Apple should "publish all censorship actions" taken that impact customers and he began retweeting content from companies that Apple has had moderation discussions ...
Read Full Article • 1428 comments