Philips Hue is back with a handful of new announcements at CES today, following Monday's news of a collaboration with Razer that allows your Hue lights to react to any game played on a device that features Razer Chroma. Philips continued that announcement by reiterating that even more partners across the gaming, movie, and music industries will debut in the future.

Philips calls this "Hue Entertainment," and added that a "Hue Sync" app for macOS High Sierra and Windows 10 devices will be coming in Q2 2018. Hue Sync will let you create and customize light scripts for games, movies, and music played on a Mac or Windows computer.

Also in Q2 2018, the company plans to update its iOS and Android apps to version 3.0, bringing about a redesign of the app inspired by comments and feedback from current Hue users. Philips said 3.0 will "enhance" existing and new features so that the smart home lighting system can be activated "with even more ease." 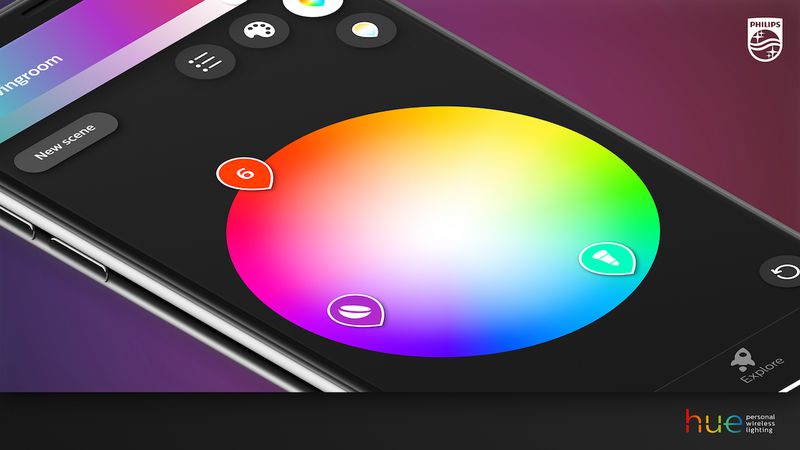 Design changes were not yet specified, but Philips said the new interface will allow you to "instantly access" last used scenes, as well as simplify how lights are grouped together.

Early in Q2 2018, Philips Hue will introduce a redesigned Hue app for both iOS and Android. Based on comments, feedback and ideas from Philips Hue users, the redesign will enhance both existing and new features, to help consumers light their home smarter with even more ease. The new app will improve daily use, and ensure seamless setup and integration of Hue accessories and new Philips Hue Entertainment partnership integrations. The interface will also enable consumers to instantly access their last used scenes, and to simply group lights and select their desired color temperature or color.

Finally, this summer Philips will introduce an outdoor line of Hue bulbs so that you can sync and control lighting in a backyard or elsewhere through the connected Hue app. No other information regarding the outdoor line and its price tag were given. 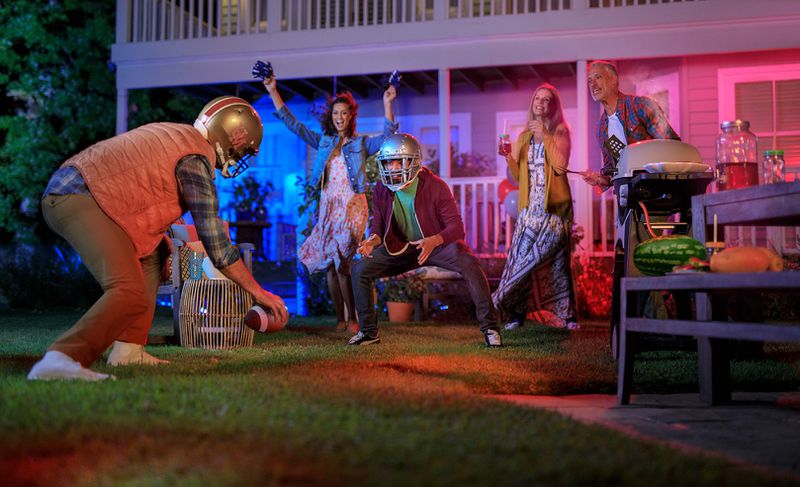 Over the past year Philips has been expanding the Hue line, launching new light fixtures, expanded starter kits, a candle light bulb, and table lamps, while extending its HomeKit support to the Hue Tap switch, Hue dimmer switch, and Hue motion sensor.

H3LL5P4WN
I still have to laugh about people complaining about the need for a bridge. Sorry, I'd rather have one connection to my network from Hue, rather than 11 (one for each of my bulbs).


They really aren't though, at least not until we have a decent short range, low power, secure mesh networking technology that is built into our phones, or routers. Bluetooth is unreliable still. Wifi works, but only for things wired into power and it increases the cost of everything because now every device needs a relatively expensive wifi chip vs cheaper Zigbee or z-wave radios.

Wifi means you have larger devices (say motion sensor or door sensors), have to change batteries more often and generally more expensive products. It doesn't make sense for embedded systems like a light bulb to have an entire wifi stack onboard.
Rating: 7 Votes

AdeFowler
I love my Hue system but the app is appalling. Here's hoping that the new version is a huge improvement.
Rating: 6 Votes

brett_x
I'd just like Philips to give us an option to restore the bulb's last known state after power outage, instead of turning all lights on at full brightness (which really sucks in the bedroom after a quick power-blip at 2AM).
There's a discussion that spans 3 years and over 300 posts of people complaining about this.
https://developers.meethue.com/content/there-way-change-startup-color
Rating: 5 Votes

In theory this sounds like it could be right, but in practice is it true? Each bulb still needs to connect to the bridge so I could see that just adding one unnecessary device. And then of course there are other devices (such as the new echo plus) that can be used as a bridge. I think also maybe iPad and/or apple tv?

FWIW I'd like for Hue's bridge strategy to be the best technically, because I just recently bought into the ecosystem


That's my way of thinking. Of course all of that traffic still goes through the network, but instead of (in my case) 11 separate connections, I only one, the bridge. My Apple TV (in the living room) is hardwired as well, so it's not like it's a big deal.


I live in the City of Bridges. You're ridiculous.
Rating: 4 Votes

superduperultra
What we need is an Apple Airport router with built-in Philips Hue support.
Rating: 4 Votes

SBlue1
Redone app? Finally, have been using the old unsupported app for ages since I didnt wanna switch to the new crap.
Rating: 3 Votes

I still have to laugh about people complaining about the need for a bridge. Sorry, I'd rather have one connection to my network from Hue, rather than 11 (one for each of my bulbs).


That's not really how it would work though. The bulbs talk to each other in a mesh network, there would be only one connection needed in a perfect world. And that would be a Bluetooth Low Energy connection to an Apple TV or iPad for Homekit or other hub/bridge for other ecosystems. You could actually make a "bridge bulb" if you think about it, and install that bulb as the closest to the Apple TV or whatever.

To be clear, I'm not complaining about the bridge, but all of these bridges are a pain in the ass if you really go all in on automation. Eventually, they need to be eliminated.
[doublepost=1515600017][/doublepost]

In theory this sounds like it could be right, but in practice is it true? Each bulb still needs to connect to the bridge so I could see that just adding one unnecessary device. And then of course there are other devices (such as the new echo plus) that can be used as a bridge. I think also maybe iPad and/or apple tv?

FWIW I'd like for Hue's bridge strategy to be the best technically, because I just recently bought into the ecosystem


Most of the bulbs don't talk directly to the bridge, they talk to each other and the bridge in a big mesh which gives them much better range around the house.
[doublepost=1515600086][/doublepost]

The bulbs are not part of your network; your computer and router don't even know they exist. Hue uses a ZigBe mesh, which is separate from your WiFi. That's why you need the bridge to "translate" from one to the other. If everything is set up properly (i.e. no radio interference between the two networks), the ZigBee traffic won't influence your WiFi at all, and vice versa.

As others mentioned, the big advantages of ZigBe over WiFi are cost, size, and power efficiency. I doesn't have anywhere near the bandwidth of WiFi, but you don' need that for sending home automation commands.

But yeah, I wish Philips would offer a WiFi-connected version (instead of Ethernet) of the bridge.


And if it were wifi, embed that bridge in a bulb. But really, they just need a "homekit" version that relies on Bluetooth as the bridge.

Zigbee isn't cheap though, there are licensing costs that I doubt exist with wifi.
Rating: 2 Votes

As others mentioned, the big advantages of ZigBe over WiFi are cost, size, and power efficiency. I doesn't have anywhere near the bandwidth of WiFi, but you don' need that for sending home automation commands.

Add to that the way the bulbs build out a mesh network in your house, so your furthest away bulbs don't have to be within range of wifi, they just need to be within range of other builbs in the network. That's the only way my front porch light would ever work, wifi doesn't reach out there.

Also add to that the fact that you don't have to reprogram each of your bulbs if you ever change your network name, passcode, router, etc. The hub just makes things easier.
Rating: 2 Votes

Are you saying you use your Apple TV instead of the Hue Bridge? I didn't know you could do that. Any advantages/disadvantages?

No, you cannot. The reason you need the bridge is because the lights use Zigbee, which uses less power than Wi-Fi.

Echo Plus incorporates Zigbee but you won’t get the same firmware support for your lights if you don’t use the Philips bridge.

Each bulb acts as a transmitter to create a mesh network rather than each light having to connect to the bridge.
Rating: 2 Votes
[ Read All Comments ]