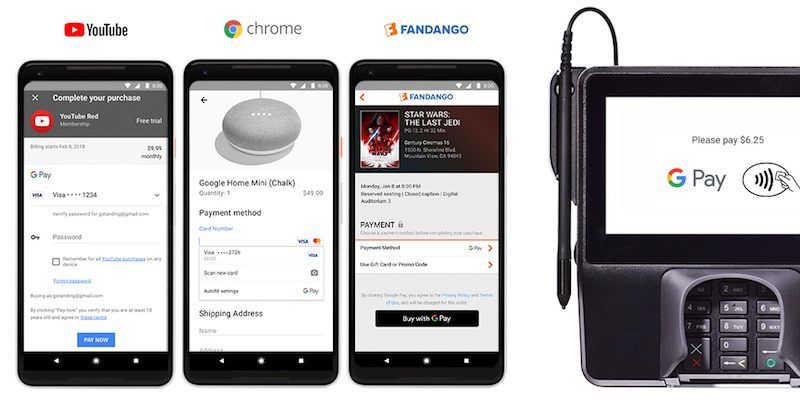 Over the coming weeks, Google said users will be able to use Google Pay online, in stores, and across Google products, and Google Wallet's existing peer-to-peer payment functionality will continue to be supported.

Google Pay is already available in select first-party apps such as YouTube and Chrome, and in Airbnb, Dice, Fandango, HungryHouse, Instacart, and select other third-party apps and websites on Android and in Chrome.

Google Pay branding will be rolled out in apps, websites, and next to payment terminals in stores as Android Pay branding and decals are retired.

Oh yeah Google... do your best work. Rip off every detail until there's nothing unique about your products.


Apple Pay was a rip off of Google wallet which came out 2 years before... If you want to trash talk Google for the 3rd transformation of their payment platform in the last 5 years go for it but at least get your facts straight
Rating: 18 Votes

mcfrazieriv
Oh yeah Google... do your best work. Rip off every detail until there's nothing unique about your products.
Rating: 12 Votes

Oh yeah Google... do your best work. Rip off every detail until there's nothing unique about your products.


I used Google wallet on my Nexus S way back in 2011, so I'm not quite sure what you think they are ripping off
Rating: 9 Votes

I used Google wallet on my Nexus S way back in 2011, so I'm not quite sure what you think they are ripping off


The actual name of Pay! But considering you have Chase Pay, Samsung Pay, Walmart Pay etc Google decided to follow the leader with the branding.

Also let me School you on this while both Android Pay and Apple Pay use tokenization google stores the credentials and the token in the cloud.

Apple Pay does not because it’s kept in the secure enclaved on the device. Not exactly the same.

Too bad they don’t copy the important things like being able to have storefronts where folks can get support for the various HW devices like Apple.
Rating: 8 Votes

Good. Google Wallet was just kind of in this weird limbo mode. Nice to have everything 'Pay' related under one umbrella again.


I used Google wallet on my Nexus S way back in 2011, so I'm not quite sure what you think they are ripping off

Yeah it's been around for quite a while.
Rating: 6 Votes

Middiebear
Whatever it takes to make these mobile payment systems more mainstream, accepted, and the preferred method of payment, I’d say the better.

3 years after Apple Pay the payment system still is slowly catching on.

I think Apple Pay/Google Pay is much more convenient, secure, & quicker than any physical card when completing a purchase. But there’s still a constant issue of which merchants accept mobile payments.

The more tech companies come on board the easier and faster the adoption rate of actually utilizing the payment feature can be. As well as applying much needed pressure to the big retail holdouts like Walmart and Target to finally come on board too.
Rating: 5 Votes

No, Europe and parts of Asia with their NFC cards were doing this 10 years ago. I don’t know why North America is so fond of 30+ year old insecure technology but both customers and merchants are.

Please don't lump Canada in with the US. The only times I've swiped my card in the last several years are when I've crossed the border into the States. Pretty much every store here has tap to pay, and have had chip + PIN for around a decade.
Rating: 5 Votes

The actual name of Pay! But considering you have Chase Pay, Samsung Pay, Walmart Pay etc Google decided to follow the leader with the branding.

Not to mention that Google came out first with Google Wallet, Samsung came out with Samsung Wallet... then Apple started using the name Apple Wallet.

So should Apple have avoided using "Pay" and "Wallet" because others had already used those words? Of course not. Common terms help users and brands alike.

In short, Apple didn't invent using "pay" for electronic payments, or "wallet" for a virtual wallet, any more than Microsoft invented "windows" for a windowing GUI. Now, if Apple had called their method something non-obvious like "Apple Air Dollars" and someone else afterwards used "Air Dollars", then people could give them grief. Otherwise, no.

I think you're confusing an NFC function... with how blatantly ripped off from Apple Pay the entire UI of this thing is which extends well beyond NFC. It couldn't be more obvious.


When Apple Pay came out, it was noticed that it had a similar look, listed the same merchants, similar APIs, similar partnerships, and even the same method of entering a card via camera, that Google Wallet had.

Even the first Apple Pay web page looked very much like the Google Wallet webpage.

This is to be expected with similar purposes.
Rating: 4 Votes

kuwxman
Good. Google Wallet was just kind of in this weird limbo mode. Nice to have everything 'Pay' related under one umbrella again.

Curious if this means we'll be able to use Google Pay on the iPhone?
Rating: 3 Votes

I legit don't get the point of Allo. It needs to be merged with sms a la an imessage type thing

I don't either. It's yet another Google app that needs to be merged and not a standalone app. I think it's their poor attempt at competing with iMessage or something. If they merge all this unnecessary crap together, they'd have a real shot at having a great iMessage alternative. If I could have iMessage for my iPhone using friends and just one app for all my Android using friends, it would be a way less painful experience.
Rating: 3 Votes
[ Read All Comments ]