Comparison: Mophie and Belkin's Wireless Chargers for iPhone X, 8 and 8 Plus

With the release of iOS 11.2, faster 7.5W wireless charging is available on the iPhone X, iPhone 8, and iPhone 8 Plus.

Now that 7.5W wireless charging has been implemented, we thought we'd take a look at both charger options for those of you who are considering a purchase following the update.

Subscribe to the MacRumors YouTube channel for more videos.
Both the Mophie and Belkin wireless chargers are priced at $60 and offer the same charging speeds, but there are some distinct design differences between the two. The Mophie charger is smaller in diameter and is available only in black, while the Belkin model is larger and available only in white.

There are dozens if not hundreds of less expensive wireless chargers available, but it's not yet entirely clear which of these - if any - support 7.5W wireless charging in Apple's new devices at this point in time. It looks like there may be an Apple-controlled factor that prevents some existing higher-watt chargers from offering 7.5W charging speeds on the new iPhones, but that's something we're still investigating in a forthcoming post comparing wireless charging options.

We tested the Belkin Boost Up Wireless Charging Pad on both an iPhone X running iOS 11.1.2 with 5W charging speeds and on iOS 11.2 with 7.5W charging speeds, and we did notice a small difference, but wireless charging speed is dependent on many different variables and it can vary.

Archer1440
Somewhat weaselly headline, as there's no actual comparison between the Mophie and the Belkin product here.

The graph format is terrible. Put time on the x axis. 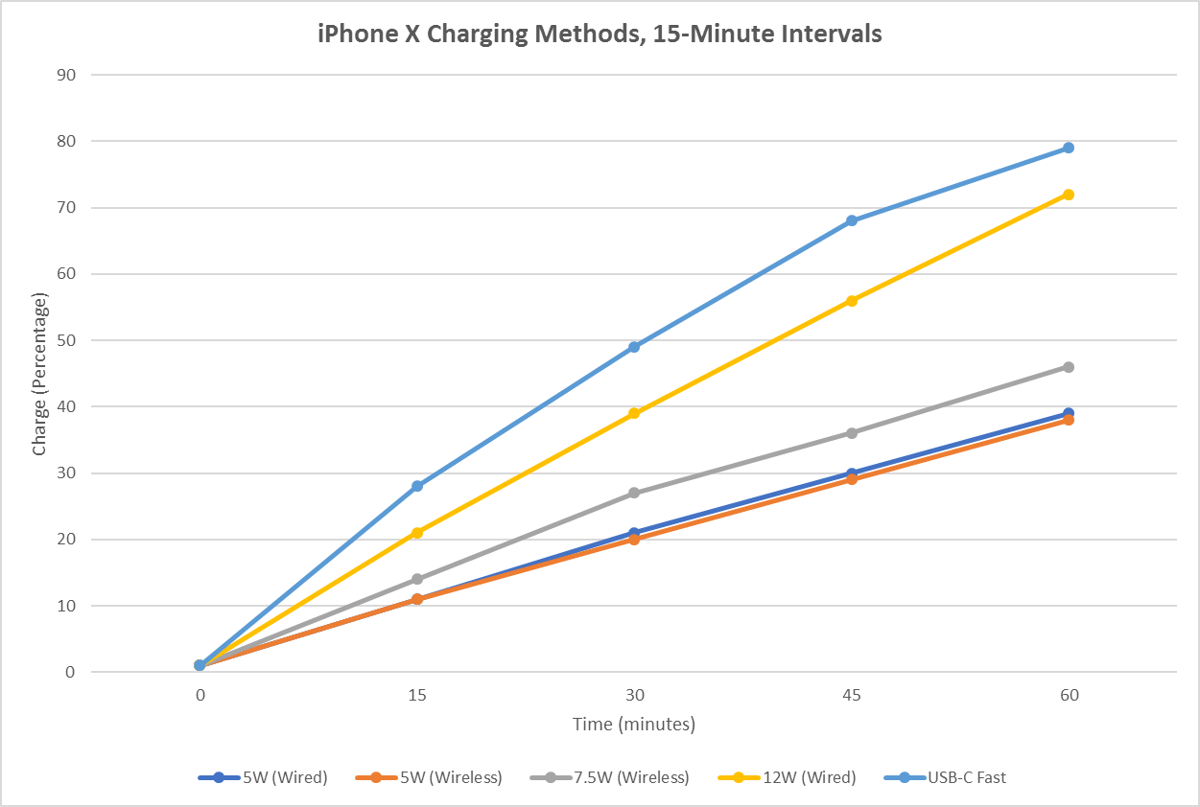 aberrero
The graph format is terrible. Put time on the x axis.
Score: 4 Votes (Like | Disagree)

HoosBruce
Can’t believe people pay $50-69 for these things. Anker or RAVPower are just as good at much more affordable price points.
Score: 3 Votes (Like | Disagree)

dohspc
I don’t like either of those options because the phone lays flat. I have the Samsung fast charge stand but it doesn’t appear that Apple is allowing the iPhone X to take advantage of the fast charging capabilities based on visual observation.
Score: 2 Votes (Like | Disagree)
Read All Comments