New Rumors of Overwatch on Mac Surface, but Blizzard Engineer Says Still 'No Plans' for Launch

New rumors surfaced this weekend suggesting Blizzard's first-person shooter Overwatch could be launching soon on Mac. A Reddit user on r/macgaming (via MacGamerHQ) managed to download an unlisted installer for Overwatch on Mac -- titled "Overwatch-Setup.zip" -- by apparently altering the download link for the PC version of the game available on the official Battle.net website.

The installer is properly signed by Blizzard and launches Battle.net -- an app that centralizes all of the player's Blizzard games into one place -- with Overwatch appearing in the "Games" tab. Redditor Heyoni shared a few images of Overwatch appearing in Battle.net on their Mac, but as of now the game is not able to launch and delivers an error message when "Play" is clicked. 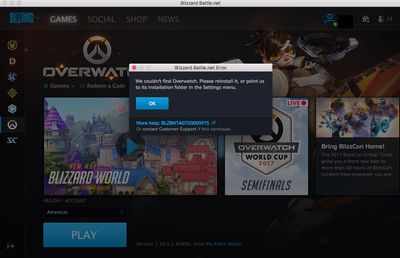 Image via Heyoni on Reddit
The Reddit thread discussing the news theorized the potential for this being a bug, or that it could be a hint for an upcoming announcement related to Overwatch's debut on Mac. Blizzard just wrapped up its annual BlizzCon event, in which it unveiled a new support class for Overwatch named Moira, a new map called Blizzard World, and a new character cinematic focusing on Reinhardt. During the event, no news was given regarding Overwatch expanding to Macs.

Unfortunately, a comment made by an Overwatch engineer in a new interview suggests Blizzard is still not planning on launching the game for Mac anytime soon. Tim Ford, the lead software engineer for gameplay systems on Overwatch, told Gadgets 360 that Blizzard has "no plans" of launching Overwatch on Mac. Ford said this is due to "several technology decisions" Apple has made on Macs, which make it "a little difficult" for Blizzard to create a Mac version of the game.

With Overwatch being available on the PS4, Xbox One, and Windows PC, it’s one of the rare Blizzard games that’s not on the Mac. It's odd considering that every other Blizzard title has graced Apple’s line of computers. Ford explained why Overwatch will not be making it to the Mac.

“We have no plans of giving this game on the Mac," says Ford. "There are several technology decisions that Apple has made that has made it a little difficult for us to release Overwatch in the way we want it to be consumed, and that is why we haven't pursued it."

Before Overwatch launched in May 2016, Blizzard said a Mac version was not a priority because it was "just too challenging" at that point to support Apple's platform, due to the "technology behind Macs." Then, in May 2017, Blizzard vice president Jeff Kaplan said the company is keeping an "open mind" about bringing Overwatch to Mac gamers, it just needs the "priorities of our development process to line up with the capabilities of the platform."

As news of the Mac installer spread online, Polygon reached out to a Blizzard representative, who stated that the Overwatch development team has "nothing to announce at this time" regarding a Mac launch for the game. For now, Overwatch is available to play on Windows PCs, PlayStation 4, and Xbox One.

iRockMan1
Overwatch is literally the only reason I ever boot into windows
Score: 6 Votes (Like | Disagree)

And they are full of **** anyway. Any Mac with Metal 2 support could run Overwatch no problem.

The engine probably doesn't support Metal. Given the time the game launched, odds are its engine was developed without knowledge of Metal, instead targeting Direct3D and OpenGL, which would've worked on macOS (but now isn't being optimized by Apple any more).
Score: 4 Votes (Like | Disagree)

Basically Blizzard is saying the time and talent investment is not worth it compared to the return on that investment. Hard to argue with that. With PC, Playstation, and XBox versions on the market, pretty much 95% of gamers are covered. 95% being a guestimate. Metal? None of the major houses care about Metal. Aspyr and Feral care about Metal and that's about it. Apple may want to invest some assets in Vulcan if they want to get serious about gaming. Either that or let Bootcamp continue to do the heavy lifting.
Score: 4 Votes (Like | Disagree)

-BigMac-
Who cares at this stage though tbh. Nearly 2018 already and mac is MAYBE getting a 2016 game. Lel.

Mac gaming is a joke, and when a game arrives, its trash compared to its pc counterpart.

Apple has betrayed the gaming community for years and some people are just not about them 2 year waits.

Who cares at this stage though tbh. Nearly 2018 already and mac is MAYBE getting a 2016 game. Lel.

Mac gaming is a joke, and when a game arrives, its trash compared to its pc counterpart.

It's a joke partly because of gaming companies that don't put the effort. It's just a market share thing. Technologically speaking, the Mac is good for gaming.
And if Overwatch is a 2016 game, Dota 2 is a 2012 game.
Score: 3 Votes (Like | Disagree)
Read All Comments