iPhone X pre-orders began at 12:01 a.m. on the West Coast and 3:01 a.m. on the East Coast in the United States, with throngs of Apple customers rushing to purchase the device as quickly as possible in the middle of the night. 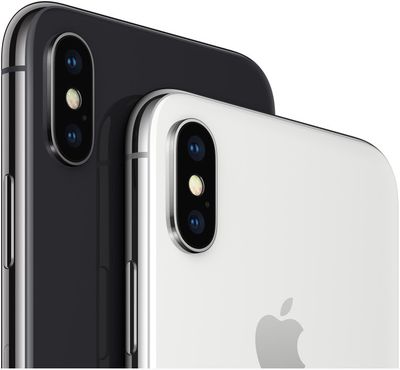 While many customers were able to complete their order quickly enough to receive a delivery date of November 3, the day the device launches, some using the AT&T app to pre-order faced unexpected delays of 10 to 15 minutes or longer.

One AT&T subscriber, for example, tweeted screenshots of the app showing that her estimated wait time was 18 minutes until she could pre-order an iPhone X, but once she got down to one minute remaining she lost her position in the virtual queue.

A second AT&T customer Chris tweeted a screenshot of the app saying "there's been an error tracking your place in line" with a "try again" button. When he tried again, he said he was placed into another 35-minute queue.

What is this @ATT I wait 47 min for the iphone X after a supposedly 15 wait and then I get this message? I’m really dissatisfied right now. pic.twitter.com/agmmIxzYUz — Christopher Saker (@CJSaker) October 27, 2017

Meanwhile, some customers attempting to pre-order on Apple.com or with the Apple Store app said the storefront remained offline for around 10 to 20 minutes after iPhone X pre-orders officially began.

iPhone X shipping estimates slipped to 2-3 weeks for most models within just 15 minutes, and to 4-5 weeks within 30 minutes, so these hiccups mean that some customers might not receive their iPhone X until early December.

Apple typically underpromises with its shipping estimates, however, so some customers may receive their iPhone X earlier than expected.

A bit of good news is that some customers who received a message from Apple stating they "can't reach the carrier systems" have received an email with instructions to complete their order for delivery as early as November 3.

WhoDatWayne
The Apple App store would not come up for about 11 minutes for me. When it finally did, i was at 2-3 weeks out.
Score: 27 Votes (Like | Disagree)

o9ski
Get life or girlfriend, or both.
Score: 20 Votes (Like | Disagree)

Why do we let Apple lie to us? It seems all of the supply constraint rumors were true, at least to some degree, yet they flat out spun it around to make it sound like there would be plenty of inventory. Bull-****ing-****, Tim Cook.

Oh wow, you've been to the store and tried to get one already? How were the lines?
Score: 13 Votes (Like | Disagree)

Get life or girlfriend, or both.

Says someone who spends time on a forum board.
Score: 10 Votes (Like | Disagree)

Vol7ron
Yeah, once again, At&t really screwed up! You would think that this would be pretty simple now. It happens once a year!
Score: 6 Votes (Like | Disagree)
Read All Comments

Sunday February 5, 2023 6:06 am PST by Hartley Charlton
A new version of the Mac Studio with the "M2 Ultra" chip is unlikely to arrive in the near future, according to Bloomberg's Mark Gurman. In the latest edition of his "Power On" newsletter, Gurman explained that since the upcoming Apple silicon Mac Pro is "very similar in functionality to the Mac Studio," Apple may wait until the release of M3- or M4-series chips to update the machine, or...
Read Full Article • 529 comments