Wednesday October 25, 2017 3:17 pm PDT by Juli Clover
Release notes for the watchOS 4.1 golden master were leaked this afternoon by developer Guilherme Rambo, confirming all of the bug fixes and feature updates that we can expect to see in the new watchOS software.

Much of what's listed in the release notes was already known because the features are available in the beta, but the notes confirm GymKit support and highlight several bugs that are being addressed in the update. 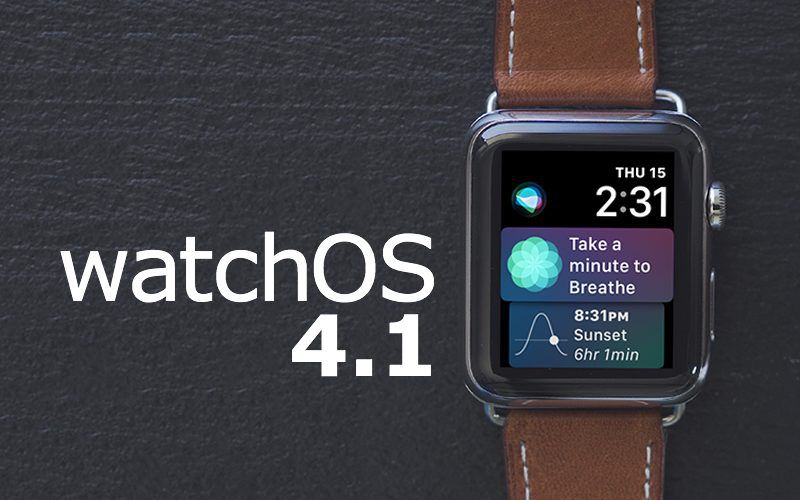 watchOS 4.1 introduces streaming music on Apple Watch Series 3, and it includes a new Radio app, which is limited to watchOS Series 3 models. Though not listed in the release notes, the update also offers several new Unicode 10 emoji. Full GM release notes are below:

As these are not final release notes, there could be additions or tweaks to the information ahead of when the new watchOS 4.1 update is released to the public. There is as of yet no mention of Apple Pay Cash, Apple's new peer-to-peer payments service, so it continues to be unclear if that feature is going to be bundled into the iOS 11.1 and watchOS 4.1 updates.

Apple employees are currently testing Apple Pay Cash as part of iOS 11.1, but support for the feature could be held back until a later update.

It's not yet clear when Apple will launch watchOS 4.1, but a release could come as soon as next week alongside iOS 11.1, macOS 10.13.1, and tvOS 11.1 if Apple is aiming to get all of its new software updates out ahead of the debut of the iPhone X.

blairh
For the love of God bring back the ability to control your iCloud/locally stored music library on your Watch.
Rating: 28 Votes

MrGimper
Does it include a feature to centre the top strap in the photo included in this news article? #OCD
Rating: 19 Votes

I’mpaced
Why can’t messages be deleted from the watch when I delete from the phone
Rating: 10 Votes

oh thank GOD! I thought I was going crazy or my watch was going bad!
Rating: 7 Votes

Thank goodness. I thought something was just wrong with my wrist...
Rating: 7 Votes

Blakjack
Just want to say the watch band on the watch pictured in this article is off center and it’s bothering me.
Rating: 4 Votes


This. Can not understand why they wouldn’t allow this. I’d like all of my iMessages to sync on my phone, watch, and iPad.
Rating: 3 Votes

ThiGeever
Both Watch OS 4 and iOS 11 have brought only frustrations to my life. I was happy with tech before those two releases. I haven't spent that much time at Apple Store and online chatting/forums since they released those ******, awful, extremely buggy operating systems.
Rating: 3 Votes

This. Can not understand why they wouldn’t allow this. I’d like all of my iMessages to sync on my phone, watch, and iPad.

I think this is exactly what iCloud Messages is/will be whenever it drops...
Rating: 3 Votes