Several reports in recent months have covered Apple's struggle to ensure significant components for the upcoming iPhone X can be produced in large enough quantities to meet demand, with the main culprit being the 3D sensing modules that power the phone's TrueDepth camera and Face ID technology. In a surprise development, a new Bloomberg report today claims that Apple overcame its production challenges by quietly telling suppliers they could reduce the accuracy of the face recognition technology to make the iPhone X easier to manufacture.

Apple's production struggles have centered on the complex 3D sensor, which consists of a dot projector, flood illuminator, and infrared camera. The flood illuminator beams infrared light, which the camera uses to establish the presence of a face. The projector then flashes 30,000 dots onto the face which the phone uses to decide whether to unlock the home screen. Specifically, Apple has had trouble making enough of the fragile modules that combine to make up the dot projector, as Bloomberg reports: 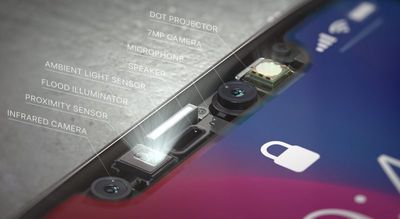 Precision is key. If the microscopic components are off by even several microns, a fraction of a hair's breadth, the technology might not work properly, according to people with knowledge of the situation.

The fragility of the components reportedly created problems for Apple suppliers LG Innotek and Sharp. At one point, only about 20 percent of the dot projectors the two companies produced were usable, according to a person familiar with the manufacturing process. The suppliers therefore slowed production in an effort to prevent breakages but lowered the required level of precision to compensate – a decision apparently mandated by Apple.

To boost the number of usable dot projectors and accelerate production, Apple relaxed some of the specifications for Face ID, according to a different person with knowledge of the process. As a result, it took less time to test completed modules, one of the major sticking points, the person said.

It's not clear how much the new specs will reduce the technology's efficacy, and Apple has declined to comment. However, as the report notes, a downgraded Face ID will probably still be far more accurate than Touch ID, where the odds of someone other than the owner of a phone being able to unlock it are one in 50,000. Even so, Apple is famously demanding on suppliers and manufacturers to help it make technological leaps and retain a competitive edge, which makes this story about the company choosing to downgrade the accuracy of Face ID all the more surprising, regardless of whether real-world functionality remains unaffected.

The delicacy involved in this production challenge has reportedly been further hampered by Apple losing one of its laser suppliers early on. The dot projector uses something called a vertical cavity surface-emitting laser, or VCSEL. The laser beams light through a lens known as a wafer-level optic, which focuses it into the 30,000 points of infra-red light projected onto the user's face. According to the report, California-based Finisar failed to meet Apple's laser specifications in time for the start of production, and now the company is racing to meet the standards by the end of October. That has left Apple reliant on fewer laser suppliers than it originally expected.

As it stands however, Apple appears to have overcome the biggest production hurdles. Sharp is reportedly working to bring the production yield for dot projectors above 50 percent, while LG Innotek has already surpassed that level, which both companies are said to consider acceptable. As a result the 3D sensor shortage is expected to end in early 2018, according to the report.

KGI Securities analyst Ming-Chi Kuo predicts Apple will have two to three million handsets available on launch day and 25 million to 30 million units for the holiday quarter, down from his previous forecast of 40 million. Pre-orders for the iPhone X begin this Friday, October 27 at 12:01 a.m. Pacific Time. Apple has said there will also be some stock of the smartphone for walk-in customers arriving early to its retail locations on November 3, the official iPhone X launch day.

iamMacPerson
Quantity over Quality. Making it on time over Making it right. The new Apple way. Just look at iOS 11.
Score: 136 Votes (Like | Disagree)

dannys1
If you live in the UK you definitely shouldn't order an iPhone X, definitely wait. DO NOT ORDER ON LAUCH. Especially a 256gb White, it'll be rubbish, do not order. Don't bother. You don't need it.
Score: 83 Votes (Like | Disagree)

Swampthing
I can already see it now. Next year please buy our new iPhone with enhanced facial recognition!
Score: 49 Votes (Like | Disagree)

Lone Deranger
"Reduced accuracy". If true, it's not really what you want to hear from a $1000+ gadget. How about you reduce your prices along with it, Apple!
Score: 45 Votes (Like | Disagree)

Quantity over Quality. Making it on time over Making it right. The new Apple way. Just look at iOS 11.

Don't believe everything you read.

SethBoy
Right, and in tomorrow’s news, Apple will replace the notch with a fingerprint sensor to speed up production. :rolleyes:
Score: 32 Votes (Like | Disagree)
Read All Comments