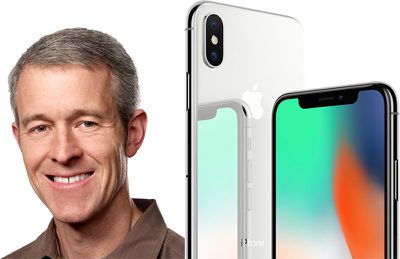 While the report did not say which topics Gou and Williams will discuss, it said the two executives will presumably look at ways to deal with the manufacturing bottleneck for Apple's new high-end smartphone.

Williams will be visiting Taiwan for the 30th anniversary of TSMC, the sole supplier of the A11 Bionic chip in the latest iPhone models, the report said. A ceremony marking the celebration is scheduled for Monday.

Multiple reports have claimed it has taken more time to assemble the TrueDepth system's so-called "Romeo" module than the "Juliet" module.

The "Romeo" module reportedly includes the dot projector that beams more than 30,000 invisible dots to create a precise depth map of your face, while the "Juliet" module includes the infrared camera that analyzes the pattern. Together, they help power new iPhone X features such as Face ID and Animoji.

Foxconn is the sole assembler of the iPhone X, while its subsidiary Sharp and LG Innotek are reportedly responsible for assembling the 3D sensor modules.

Today's report cited an industry executive who said that while the yield rate has improved, it has not yet reached a satisfactory level. The executive believes it's unlikely the yield rate will reach a level that will enable Apple's suppliers to churn out the iPhone X at their full capacity by the end of October.

Jeff Pu, an analyst with Taipei-based Yuanta Investment Consulting, recently cut his forecast of the number of iPhone X devices that will be produced this year from 40 million units to 36 million. It was the second time he has revised down his estimate, which originally totaled 45 million earlier this year.

iPhone X pre-orders begin one week from today in the United States and more than 55 other countries. The device launches November 3.

Guda.FL
IF i happen to get one on release day, I will ebay it so fast. Will pay for a weeks vacation.
Score: 13 Votes (Like | Disagree)

Terry Gou: Mr. Williams. This is an unexpected pleasure. We are honored by your presence.

Jeff Williams: You may dispense with the pleasantries, Chief. I am here to put you back on schedule.

Terry Gou: I assure you, Mr. Williams, my men are working as fast they can.

Jeff Williams: Perhaps I can find new ways to motivate them.

Terry Gou: I tell you that this product line will be operational as planned.

Jeff Williams: The CEO does not share your optimistic appraisal of the situation.

Terry Gou: But he asks the impossible. I need more men.

Jeff Williams: Then perhaps you can tell him when he arrives.

Jeff Williams: That is correct, Chief, and he is most displeased with your apparent lack of progress.

Terry Gou: We shall double our efforts.

Jeff Williams: I hope so, Chief, for your sake. The CEO is not as forgiving as I am.
Score: 12 Votes (Like | Disagree)

Bryan Bowler
Time for the Romeos to get their game on and start hooking up with the Juliets faster!!
Score: 10 Votes (Like | Disagree)

Red Oak
Why is this even news? Jeff should parked right now at the factories getting this right-sided
Score: 7 Votes (Like | Disagree)

IF i happen to get one on release day, I will ebay it so fast. Will pay for a weeks vacation.

You must go on holiday to some pretty crappy places.
Score: 6 Votes (Like | Disagree)

SwissGuy93
Did the other post from a few hours ago not say that KGI thinks the production woes are over? And sorry, there is no indication that this will have to do with the reported production issues. If the situation would be as dire as KGI says then Williams would have been in China weeks ago.
Score: 5 Votes (Like | Disagree)
Read All Comments