Apple Pay is rolling out to all Saks Fifth Avenue, Albertsons, and Dick's Sporting Goods locations across the United States. It's also coming to McDonald's and Chipotle's order-ahead apps in several cities later this year. 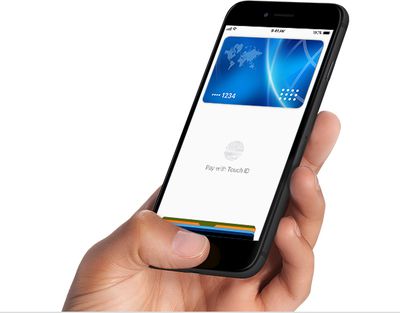 Meanwhile, contactless tickets supported in Apple's Wallet app are coming to all Ticketmaster sports and concert venues in the United States.

Jennifer Bailey, Vice President of Apple Pay, revealed the news at the Money20/20 conference in Las Vegas over the weekend. On stage, she also revealed several other statistics about Apple's mobile payments service.

Namely, she said Apple Pay will be available in 20 markets after it launches in Denmark, Finland, Sweden, and the United Arab Emirates as early as this week. We've also heard rumors about Apple Pay coming to the Netherlands, Poland, and Norway, but Apple has yet to confirm a rollout to those countries.

Bailey said that Apple Pay now works with over 4,000 banks and other participating issuers around the world. She added that 50 percent of retailers in the United States now accept the mobile payments service.

As mentioned during Apple's most recent earnings call, Bailey echoed that Apple Pay is by far the most popular contactless payment service on mobile devices, accounting for nearly 90 percent of all transactions globally.

In related news, payment processor First Data today announced that Clover Go, its all-in-one contactless, chip, and swipe card reader, will be available in the coming weeks on Apple.com and in Apple retail stores across the United States.

First Data also said more than one million of its business clients now accept Apple Pay. The company plans to enable Apple Pay support for loyalty and gift cards at these merchants through integration with its Clover platform.

Meanwhile, Apple Pay Cash could launch alongside iOS 11.1 or shortly afterwards in the United States. Apple has invited both its corporate and retail employees to test the feature in beta over the past few weeks.

This is great, love the expansion! At the same time, I would like to see some more of the current businesses a little more educated about what the heck Apple Pay is.

I’d say 75% of the time I go to use it, I still see utter confusion on the face of the cashier.

That’s certainly not Apple’s responsibility, but it may not hurt for them to just give a little refresher to some existing companies. :)

Its even better when you keep your Apple Watch under your sleeve so the cashier thinks you're a wizard.
Score: 8 Votes (Like | Disagree)

Brookzy
What is this store-by-store expansion rubbish? Get your **** together, America - the rest of the world manages to automatically accept Apple Pay wherever contactless payments are accepted. Which is the majority of places.
Score: 5 Votes (Like | Disagree)

dlewis23
Now only if Publix would go for it. I shop there more then any other store.
Score: 4 Votes (Like | Disagree)

Derekeys
This is great, love the expansion! At the same time, I would like to see some more of the current businesses a little more educated about what the heck Apple Pay is.

I’d say 75% of the time I go to use it, I still see utter confusion on the face of the cashier.

That’s certainly not Apple’s responsibility, but it may not hurt for them to just give a little refresher to some existing companies. :)
Score: 3 Votes (Like | Disagree)

Um no no joke. Samsung phones work in far more places than iPhones. What don’t you understand?

I think you truly misunderstood my post and were offended in some way lol...it’s ok.

Sorry, I did misunderstand. I thought you were joking that no one has a Samsung phone... which does apply to most of my friends!

At the risk of sounding stupid - in the US, why does "Samsung Pay" work in places where Apple Pay doesn't? I've never heard of Samsung Pay (is it just branded 'Android Pay' in the UK?).

In the UK, or at least in London, Android/Apple Pay both work everywhere. And in the case that one doesn't work, the other won't either.

Remember that in the US, Chip and PIN was not a thing until recently. Samsung Pay works with NFC if present, and if not with MST. MST is a patented process that makes the card reader think a card was swiped, by applying a magnetic field to it. It still uses a token for the card number, so just as secure. Nearly every terminal in the US has a card reader, but many do not have NFC. This isn't a unique US thing... works anywhere... but the US is where this problem of old readers is more prevalent.
Score: 3 Votes (Like | Disagree)
Read All Comments