The third macOS High Sierra 10.13.1 beta can be downloaded from the Apple Developer Center or through the Software Update mechanism in the Mac App Store with the proper profile installed. 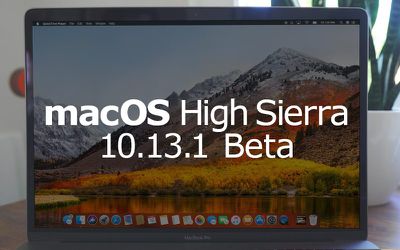 Safari have bug, new tab and click any link in bookmark ( favourite). Freezer and lag. Please see and fix.

Who are you talking to? This is a beta. If you have a problem, use the Feedback app installed in the Dock and send you complaint to Apple.
[doublepost=1508321243][/doublepost]

It's kind of amazing the things they can break in such minor updates. o_O

It's a minor update to a major BETA! Things are SUPPOSED to be broken. If you run a beta OS, it's your job to find the bugs and report them.
Score: 8 Votes (Like | Disagree)

You are aware CDN's are also subject to DNS propagation, right?

DNS propagation of what? Why would there be any new DNS entries here? It's a blob of data that's being propagated through a CDN. Nothing to do with DNS.
[doublepost=1508295377][/doublepost]

Well that was snappy.

Still no Mac Blu-Ray player though.

Also in other news of never-gonna-happen, no PowerBook G5.
Score: 4 Votes (Like | Disagree)

Likewise, hesitant to upgrade from Sierra on 2013 MBA. So I’m only testing high sierra on external SanDisk drive.

I'm on a 2013 Air and High Sierra is working perfectly.

Obviously, you're not trying hard enough ;-)
Score: 4 Votes (Like | Disagree)
Read All Comments