It's been another busy week in the world of iOS gaming, so let's hop right into it: As usual, we've had our eyes closely on the "Updates" page of the App Store looking for 32-bit favorites to reemerge as 64-bit titles. The Mikey Shorts Trilogy, the majority of the Radiangames library, and Dragon Fantasy all finally made their way to 64-bit.

Any of these games are effortless recommendations, particularly as they're from the good ol' days of the App Store before freemium shenanigans took over. Dragon Fantasy is particularly good if you're looking for a modern spin on retro RPGs. It hit the App Store back in 2011 and since has been ported to Vita, 3DS, Android, and PC.


The most unexpected surprise of the week, without question, was Annapurna dropping Flower onto the App Store. It's by Thatgamecompany, who is also responsible for the upcoming game Sky that was teased back at the iPhone reveal keynote. One of the main reasons we're super excited for Flower to hit the App Store is what it means for speculating on what other games of theirs might come in the future as it seems like the sky is the limit. I'd love it if Journey eventually made its way to iOS.
Modern Combat Versus also hit the App Store, which thematically speaking is the complete polar opposite of blowing petals around on the wind in Flower. Versus is an online team-based multiplayer shooter, set in a futuristic and gritty military environment.

Gameplay is sort of similar to titles like Overwatch or Team Fortress 2, but it's on your iPhone. It has a Clash Royale-ish chest unlocking system to divvy out loot, and we're really curious to get deeper into the game to see how much or how little these freemium shenanigans impact overall balance if you don't empty your wallet.


Super Mario Run got a huge update, which not only comes packed with loads of new content, but the whole game unlock is on sale for $4.99, down from its original $9.99. Super Mario Run was pretty controversial in the TouchArcade community when it was first released as it wasn't seen as a "real" Mario game, but given the constraints of virtual controls I think it's definitely worth trying out if you still haven't yet, regardless of whether or not you end up paying for it. 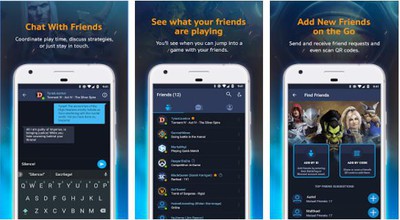 This week Blizard released the Blizzard Battle.net app, which basically just serves as a chat client for Battle.net. One thing I hadn't realized which came out when we published this story is just how many people had Hearthstone on their phones specifically to communicate to their Blizzard game friends, even if they don't play Hearthstone. If that describes you, well, you can now save gigs of space on your phone by deleting Hearthstone. (But, really, Hearthstone is great and you should really play it instead of deleting it.)

In other Blizzard news, rumors are flying surrounding a new mobile game that Blizzard is working on. A job posting recently appeared (which is now removed) where Blizzard was searching for a Unity mobile engineer to work on a unannounced "MMO RTS project." Whether this is going to be an adaptation of their existing IP, or like Overwatch, a totally new Blizzard IP is totally up in the air. Given how well Hearthstone has done, it seems supremely inevitable that Blizzard will release something else on mobile though, whatever it turns out to be.


Limbo has been on the App Store for ages now, but Playdead just announced plans to bring its PC and console game Inside to both iOS and Switch. There isn't a ton to go off of here aside from a vague announcement, but both Limbo and Inside have massive fan followings so we're going to be watching this one closely.
Last, but not least, is a teaser for an upcoming puzzle game called Campfire Cooking. I absolutely love how developers on the App Store continue to find new ways to reinvent grid-based puzzles, and in this one you're moving food around a grid that represents a campfire. Check out the trailer — it's super clever, as "fire and food management" isn't something I think I'd ever thought of for a puzzle game.

Those are the big stories this week, but as usual, if you're into these sort of things be sure to head over to TouchArcade where we post this kind of stuff day in and day out.

Xavier
Inside looks pretty interesting. Hope that one comes to iOS, or even macOS for that matter.
Score: 1 Votes (Like | Disagree)
Read All Comments