Apple's newest operating system, iOS 11, is seeing slower adoption rates than iOS 10 saw during the same adoption period last year, according to data collected by analytics company Mixpanel. As of 10:00 a.m. Pacific Time, 24 hours after iOS 11 was released, the OS is installed on 10.01 percent of devices. 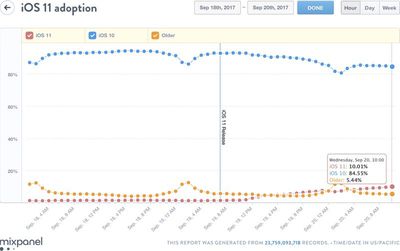 iOS 11 was not affected by installation issues or other problems like iOS 10 was, but past issues with new iOS releases may be keeping some users from upgrading right away. The iOS 11 update also disables all 32-bit apps, another factor that could be holding some users back.

Adoption rates often spike up a bit over the weekend when people have more free time to make major software updates to their devices, so iOS 11 could catch up to iOS 10 at that point.

As people begin adopting iOS 11, iOS 10 adoption is trending downward. iOS 10 is now installed on 84.55 percent of devices, while 5.44 percent of users continue to run an older version of iOS.

iOS 11 is a free download that's available for download on the iPhone 5s and later, iPad mini 2 and later, and the 6th generation iPod touch. There are dozens of new features in iOS 11 and several overhauled interface elements, so it's worth an upgrade if you haven't already. For full details on what's new iOS 11, make sure to check out our iOS 11 roundup.

I didn't kill him your honour, I simply pulled a trigger that released a teeny-tiny hammer.
Score: 17 Votes (Like | Disagree)

AngerDanger
Yep, sounds about right; I opted to install iOS 11 on the top tenth of my iPhone.
Score: 15 Votes (Like | Disagree)

arggg14
My company (10,000 employees world wide) advised us not to update because of the outlook bug.
Score: 14 Votes (Like | Disagree)

nburwell
I mean, it's only been 24 hours. My wife only installed iOS 11 on her 7 because I told her about the update. A good amount of people I know don't know there is an update until they see the '1' notification in the settings app.
Score: 11 Votes (Like | Disagree)

Indeed. Blame the developers for abandoning you.....

This is bad. 50% battery drain in less than hour just going on Facebook.
And phone hot to touch.
Not happy. This is on iPhone 7plus.
Why can't apple test their iOS fully before release. Every B****y time this kind of thing happens. Puts you off iPhones for good.
I haven't heard android becoming useless after every update!

Most Androids can't even update...
Score: 7 Votes (Like | Disagree)
Read All Comments