With the upcoming launch of the iPhone X in November, Apple is preparing to debut an all-new biometric security feature called "Face ID." By using half a dozen front-facing sensors and an enhanced camera system, the iPhone X will be able to project more than 30,000 invisible dots onto your face, create a precise map of what it sees, and remember it so that all you have to do to unlock the iPhone X is look at it with your eyes open, and swipe up on the Lock Screen.

Although it's yet to be seen if this feature will be "well received" by users, a new report by Bloomberg today cites a few startups in the technology industry that have noticed Apple's influence already beginning to make waves in the face-scanning technology market. These startups -- which specialize in technology related to facial recognition systems -- say they have "already seen a pickup in demand" from certain companies interested in their technology, starting soon after iPhone X event day on September 12. 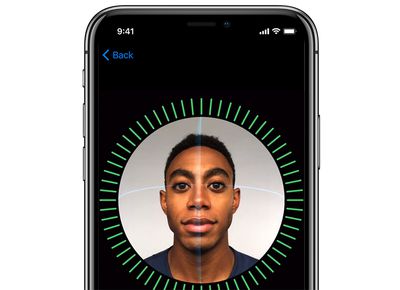 George Brostoff, CEO of one such startup called Sensible Vision, told Bloomberg that Apple's Face ID/iPhone X announcement "makes companies like Motorola, like LG come knocking on the doors of companies like ours." Brostoff said that the company is now fielding calls from potential buyers, including talks with "virtually all of the world's phone manufacturers," with expectations set for the startup to be sold to one of these interested parties -- which excludes Apple -- within a year.

While not everyone will buy the $999 high-end iPhone, rival electronics makers are already trying to figure out how they can incorporate the technology in their offerings. Startups selling their own versions of facial recognition say they’ve already seen a pickup in demand since Sept. 12, when Apple announced the iPhone X, aka 10.

“We now have a leader like Apple acknowledging that this makes sense,” said George Brostoff, chief executive officer of SensibleVision Inc., a Cape Coral, Florida-based startup that makes software for tablets and smartphones. “This makes companies like Motorola, like LG come knocking on the doors of companies like ours.”

Looking forward, research firm Crone Consulting LLC reported that facial recognition will account for "more than half of all [device] log-ins" over the next three to five years, including users authorizing mobile banking apps and payments. In terms of earnings, researchers at MarketsandMarkets predicted that the market for Face ID-like biometric security systems will double from the $3.35 billion it made in 2016, to $6.84 billion in 2021.

Apple software engineering chief Craig Federighi has made the rounds since the September 12 keynote event, assuring users that Face ID is "incredibly reliable," "very fast," and it "just works." He's said that he understands user uncertainty over the new feature, but these concerns will "melt away" once they get the iPhone X in their hands. In terms of security, Apple has also said that your face is saved only to the iPhone X and not accessible by anyone who doesn't have access to the device.

According to Federighi, all of these behind-the-scenes Face ID features come together flawlessly: "You don't even think about it," he said.

Zaft
Not surprising, I bet wireless charging will suddenly be popular.

Apple is a trend setter.
Score: 12 Votes (Like | Disagree)

Not surprising, I bet wireless charging will suddenly be popular.

Apple is a trend setter.

Even Phil said in the keynote wireless charging will become more popular now that iPhone has it. And it’s true, Apple has a good following. They have pretty high credibility.
Score: 11 Votes (Like | Disagree)

I have a beard as well, that is a concern to me too!

If there is a massive change to your face, can't you just enter your passcode and re-setup Face ID? Will this be a repeated thing, every day? Sort of like asking what if i need to wear (capacitive) gloves one day! Well, I guess i'll punch in the passcode that day. What if I break all my fingers and my Touch ID hand is in a cast? Well, i'll enter the passcode then set up fingers on my other hand.
Score: 10 Votes (Like | Disagree)

Even Phil said in the keynote wireless charging will become more popular now that iPhone has it. And it’s true, Apple has a good following. They have pretty high credibility.

It's funny with some of these technologies.... on one hand you have the "Oh Apple, welcome to the party, finally :rolleyes:" brigade, while secretly also thinking "Yay, now Apple are onboard, this technology will take off big time"

Face-ID is more secure than Touch-ID, According to Apple It is estimated that the accuracy of Face ID will be 1 in 1,000,000 when compared to the 1 in 50,000 of Touch-ID fingerprint.

What if, one shaves clean their foot long beard? That's the test I wanna know.

I think worst case, you just re-enroll your face. They say it learns your face so you would probably good from that point on.
[doublepost=1505920083][/doublepost]The industry follows Apple's lead, as always.
Score: 5 Votes (Like | Disagree)
Read All Comments