A day after Apple began accepting pre-orders for the iPhone 8, iPhone 8 Plus, and Apple Watch Series 3, the first orders have shifted to "preparing for shipment" ahead of a promised Friday, September 22 delivery date.

Apple began preparing Apple Watch Series 3 orders starting yesterday afternoon, while the order status of the iPhone 8 and iPhone 8 Plus appears to have started changing this afternoon. Apple TV 4K orders have not yet updated to preparing for shipment, but that should happen soon. 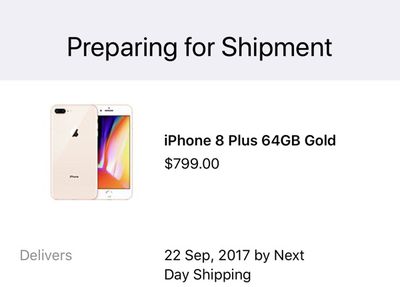 Pre-orders for all three devices started at 12:01 a.m. Pacific Time on Friday, September 15. While some SIM-free and T-Mobile iPhone 8 and iPhone 8 Plus models sold out relatively early for home shipping, supplies of other devices have remained strong. It should be no problem to pop into an Apple Store on launch day and pick up an iPhone 8 or 8 Plus.

It may be more difficult to get one of the new Apple Watch Series 3 models with LTE connectivity, as several configurations did sell out and list shipment dates of a few weeks. In-store pickup is also unavailable for these models. Non-LTE models are, however, readily available.

Orders that have been updated to "preparing for shipment" status should begin officially shipping out over the course of the next day or two. The first orders will arrive on Friday, September 22, with customers in New Zealand and Australia being among the first to get their hands on the new devices.

Wish getting the iPhone X would be this easy!!

pre ordering the iPhone X will be easy, as long as your pre order gets in within 3.5 seconds after pre orders go live on the 27th of Oct. Any moment after those 3.5 seconds, and you will be get an email half an hour later from Apple with your estimated shipping time:
''March 22-29, 2018'' ;)
Score: 25 Votes (Like | Disagree)

Traverse
Despite the criticisms and claims that the X is the only valuable option,

I'm genuinely excited to get my iPhone 8! I still haven't decided if I'm getting the Watch though.
Score: 22 Votes (Like | Disagree)

Goodluck for those getting iPhone 8, I am waiting and will get iPhone X. To me iPhone 8 Plus doesn't seem big upgrade over my iPhone 7 Plus.

Same here. But, to be honest, I am dreading October 27th at 3AM (Eastern). I have a feeling it'll be a cluster**** and Apple's servers (as well as the carriers) are gonna crash and we'll see ship dates slipping almost immediately. The anticipation for this new phone, combined with the very tight supply, is going to leave a lot of people upset.
Score: 17 Votes (Like | Disagree)

Why would anyone waste money on the 7s with the X around the corner?

That’s all in your perspective... I could say “Why would anyone waste over $1000 to beta test the X with the refined 8 already available?”

JPack
Probably one of the weakest launches in recent history.

All iPhone 8 and 8 Plus models available in 1-2 weeks.

I predict the same situation that happened in 2016 where Tim Cook's pay was reduced due to lower than expected demand for the iPhone 6S.
Score: 14 Votes (Like | Disagree)
Read All Comments