Thursday August 24, 2017 10:11 am PDT by Joe Rossignol
Benjamin Geskin‏ today shared a photo of what appears to be four bare logic boards that are likely for the so-called iPhone 7s Plus. 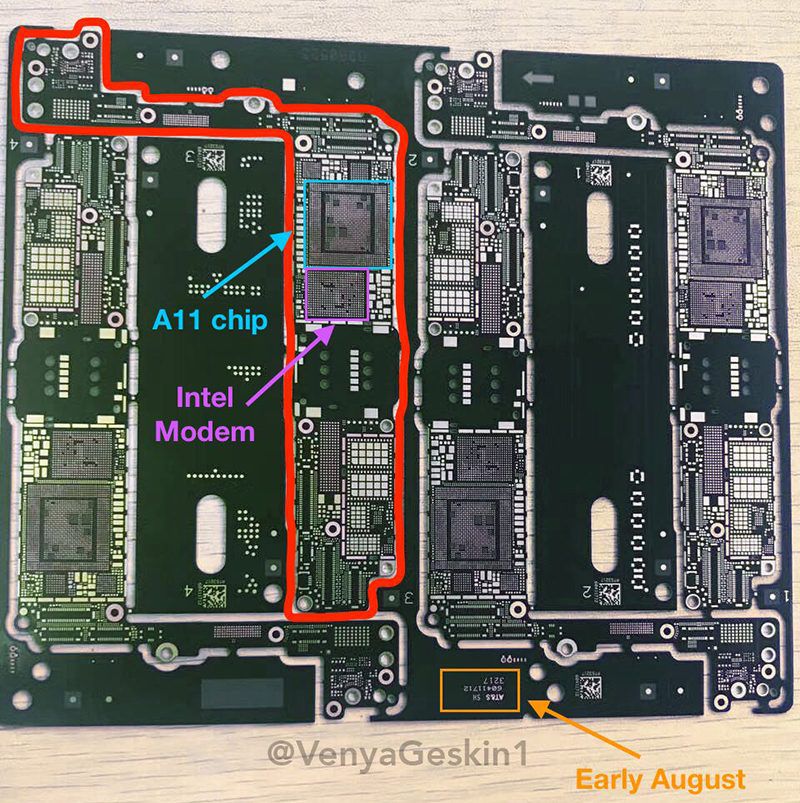 Alleged logic board likely for iPhone 7s Plus via Benjamin Geskin

The so-called iPhone 8, meanwhile, is expected to have a stacked logic board design with a L-shaped two-cell battery pack, which effectively rules out this logic board being for the widely rumored OLED display model.

The logic board isn't populated with components, but there are pads etched on it that suggest the iPhone 7s Plus will be powered by an Apple A11 chip, while at least one model appears to have an Intel modem.

We know this because blurry images of the alleged A11 chip were shared by Chinese social media account GeekBar last week, and the rear design of the chip is consistent with the pad on the bare logic board.

Alleged photos of Apple's A11 chip via GeekBar

Apple's A11 chip reportedly uses a new 10-nanometer FinFET manufacturing process introduced by supplier TSMC, and it will undoubtedly be faster than the A10 Fusion chip in the iPhone 7 and iPhone 7 Plus.

As for the modem being supplied by Intel or Qualcomm, the modem pad pattern is virtually identical to the one on the iPhone 7 and iPhone 7 Plus logic board, and those smartphones are equipped with Intel's XMM7360 chip.

While not pictured, Apple will likely continue to dual source modems from Qualcomm for its upcoming iPhone lineup. Qualcomm's legal dispute with Apple, however, could push more orders in Intel's direction.

The logic board is etched with a "3217" timestamp, corresponding with the 32nd week of 2017, suggesting it was manufactured in early August.

The rest of the logic board is largely the same as the bare iPhone 7 logic board that surfaced last August — and proved to be real. 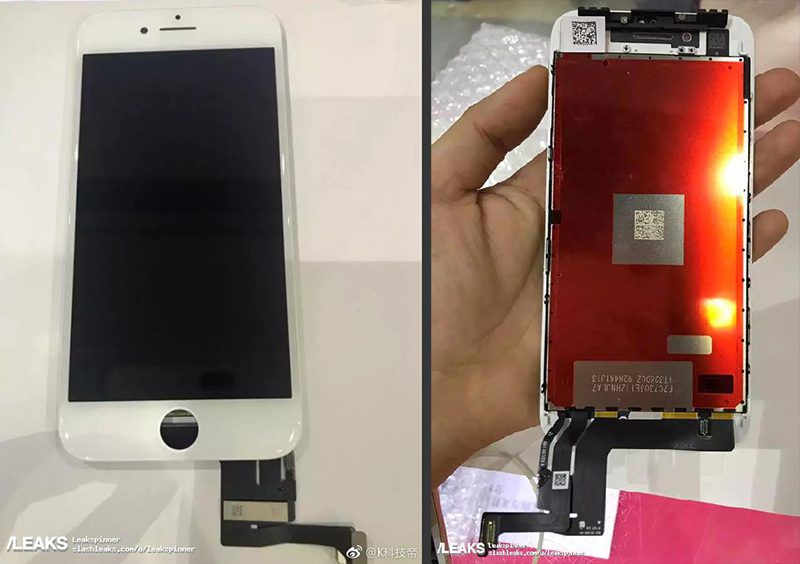 In related news, photos of what could be the iPhone 7s's display assembly have surfaced on Chinese social platform Weibo. If real, the part reveals no surprises for the iPhone 7s, which is expected to look similar to the iPhone 7.

Apple is expected to announce its new iPhone lineup at a September event, potentially alongside a new 4K Apple TV and Apple Watch Series 3.

Crzyrio
Man, imagine there ends up being no iPhone 8 announcement? Just the 7s.

Jeez, I hope Apple announces these phones soon so less is spoiled

Relentless Power
The A11 is going to distribute some serious power. Looking forward to Geekbench scores later on.
Rating: 18 Votes

brian3uk
I sure hope the Intel modem is not the exact same one.
Rating: 16 Votes

It amazes me how many say they can't afford the new iPhone.

Every year I sell mine and put it towards the new one. I got $500 for my 6S Plus. And now with the iPhone Upgrade Program you just pay for the phone monthly.

Disposable income is a fine thing to have.

Meanwhile, my car is sitting in my driveway because I can't afford to get it fixed. Gotta pay bills and buy groceries.
Rating: 16 Votes

lunarworks
There's no way on earth I'm going to be able to afford an 8, so let's hope the 7s delivers. :/
Rating: 13 Votes

There's a chance that could happen.


There is literally no chance of this happening.

Disposable income is a fine thing to have.

Meanwhile, my car is sitting in my driveway because I can't afford to get it fixed. Gotta pay bills and buy groceries.

Whether the iPhone is $400 or $900, you have more important things going on to worry about and pay for.
Rating: 9 Votes

The A11 is going to distribute some serious power. Looking forward to Geekbench scores later on.


So now your phone can run facebook and snapchat faster? aewsome!!1
Rating: 6 Votes

borgqueenx
Apple A11, confirmed! Great news, especially for the people who believed they would stick with the A10 chip!