If MacRumors gave out an award for Most Revealing Apple Leak of the Year, there's a good chance the plaudits for 2017 would go to Apple's unintentional public release of HomePod firmware. Apple's beta code turned out to include a trove of intriguing references to upcoming products yet to be announced, including the Apple Watch Series 3, the so-called "iPhone 8", and a fifth-generation Apple TV. 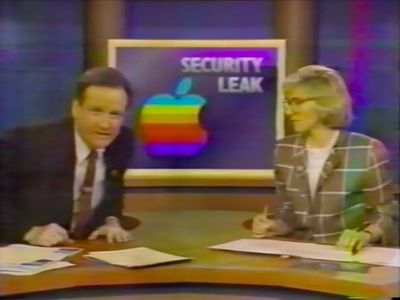 Still, that pales in comparison to at least one Apple leak of yore that has just been unearthed by Fast Company, proving that Cupertino was unable to keep its secrets behind lock and key long before the era of social media and 24-hour online news coverage.

The video below is a local news item from San Francisco's KGO, broadcast back in February 1988, which features an interview with late tech-media pioneer and Macintosh Today magazine founder David Bunnell.


In the short clip, Bunnell tells news anchors how his publication managed to get hold of a 160-page internal Apple document laying out detailed plans for the Macintosh Portable, the company's first mobile computer, several months before its official unveiling the following September.

During the exchange, news anchor Pete Wilson asks Bunnell if the whole leak could be a secret ploy by Apple – perhaps in collusion with the magazine – to drum up interest in the computer ahead of its release. Bunnell refutes the suggestion, claiming that Apple doesn't like to pre-announce products and prefers to control the information that comes out of the company.

Whatever the truth on this occasion, as Fast Company notes, even a massive leak such as Bunnell's scoop couldn't save the Macintosh Portable, which turned out to be a flop for Apple, before being superseded by the vastly superior PowerBook in 1991.

Yes.
I wonder what ever happened to THAT guy? :eek:

Sunny1990
I think iPhone 4 was probably the biggest leak in Apple's history. Nothing will ever beat the it.
Score: 3 Votes (Like | Disagree)

[doublepost=1503332479][/doublepost]If this was broadcast back in February 1988 and the Portable was released on September 20, 1989 surely this was a full 18 months before the release and not 6 months as stated?

Justim
Whaaaat are those hand movements. They're creepy with his stiff upper body and don't match what he's saying.
Score: 1 Votes (Like | Disagree)

macTW
Skeptical this was accidental. Of course the man who's job relies on the "accident" would say it was one.
Score: 1 Votes (Like | Disagree)
Read All Comments