Despite the objections of some cinema chains, the largest Hollywood studios are considering pushing ahead with a plan to offer digital rentals of films just weeks after they appear in theaters, according to Bloomberg. 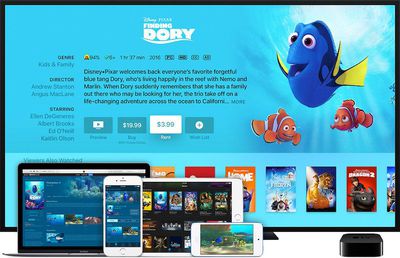 The report, citing people familiar with the matter, claims Universal Pictures and Warner Bros. remain in talks with potential distributors such as Apple and Comcast on ways to push ahead with the project even without theater chains.

A deal with Apple, which reportedly could happen as soon as early next year, means iTunes could supposedly offer major films as early as 17 days after their theatrical debut for about $50, or four to six weeks from release for $30.

That timeframe would be significantly shorter than the current average of three months between a major film's theatrical release and availability in DVD and digital formats, but it would also cost viewers more than an $8 to $15 movie ticket.

The revenue from the premium video on demand, or PVOD, product would help offset a continuing decline in DVD sales, which were down 10 percent in the first half of 2017, according to research firm The Digital Entertainment Group.

Disney, which plans to remove its movies from Netflix and launch its own streaming service by 2019, reportedly isn't interested in the PVOD talks.

Bloomberg first reported on the discussions in December, when it claimed 21st Century Fox, Universal Pictures, and Warner Bros. were all seeking deals with Apple to create a $25 to $50 premium movie download product.

xalea
Not for $50, but I'm kind of over the theatre experience, which is sad. Even with all the improvements made like reclining chairs, screen/sound, etc. I'm just not into it. Last time I went everyone was reclined practically flat including some strange guy right next to me. I thought he should've at least bought me a drink first..
Score: 41 Votes (Like | Disagree)

Jsameds
I'm happy with the theater to DVD timescales as they are. I just want an all you can eat subscription to the iTunes store for a reasonable price.

All this will do is encourage piracy with super-early WEB-DL's
Score: 26 Votes (Like | Disagree)

I guess I'm a stupid European, but are talking about a monthly fee like Netflix?
I read it like $50 per movie, but that can't possible be true?

Yes, it is true. $50 per movie rental. This isn't a service for one person to rent a movie to stay in. Its for families. Where Mom and Dad taking the kids to the theater costs $50 in tickets alone. Then of course the kids want popcorn and soda for another $30. Plus drive time, and while we're out we might as well get lunch.

$50 and 2 bags of microwave popcorn will be much cheaper for families than the full blown movie experience.
Score: 19 Votes (Like | Disagree)

In that case, yes but pricing is all relative. My wife and I can go for under $30.
Score: 15 Votes (Like | Disagree)
Read All Comments