Apple Negotiating to Offer Rentals for Movies Still in Theaters, but at a Price

Apple wants to bring new movies to iTunes more quickly, and is in talks with several film studios over rights that would allow it earlier access to content, reports Bloomberg.

Warner Bros, Universal Pictures, and 21st Century Fox are all seeking deals to offer higher-priced rentals of new movies as soon as two weeks after they debut in theaters, and the studios are said to be considering an offer from Apple. 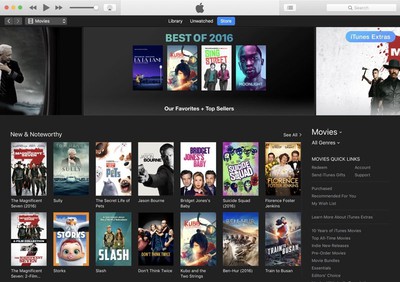 Like Apple Music exclusives, access to earlier releases could draw more people to Apple's platform, but encryption is said to be a concern. Studios aren't sure whether iTunes will be a secure platform for showing movies that are still in theaters, because content can be recorded and leaked online.

The most recent talks are part of longer-running efforts by Cupertino, California-based Apple to get new movies sooner, two of the people said. Such an arrangement could help iTunes stand out in a crowded online market for movies, TV shows and music. While the iTunes store helped Apple build a dominant role in music retailing, the company hasn't carved out a similar role in music and video streaming.

Most major movies that debut in theaters are not available on iTunes and other streaming platforms for a period of 90 days, but film companies are said to be looking to expand beyond theaters to find new revenue streams.

At least one option studios are considering involves a $25 to $50 fee for a new rental, which is potentially more affordable than a movie theater ticket depending on how many people are watching a film.

No deal has been established as of yet, and it's possible the film studios could decide to offer the rights to a competing company.

Babu Life
$50 dollars for a rental? i guess thats courageous too
Score: 38 Votes (Like | Disagree)

aristobrat
Even if folks can't decrypt the iTunes encryption, I bet the quality of the "cam" bootlegs will dramatically increase. :)

If it's in the $20-$30 range, I'd be willing to pay for this. I'd much rather watch a new release at home than in the theaters around where I live.
Score: 22 Votes (Like | Disagree)

ProjectManager101
We should start by having movies worth watching.
Score: 21 Votes (Like | Disagree)

rammes
so we get a hd rip within two weeks? I wonder if the studio's take that risk
Score: 17 Votes (Like | Disagree)

ThaRuler
This is proof the Apple Watch is a flop
Score: 17 Votes (Like | Disagree)

They should have a movie subscription pass. I've got a movie pass for a cinema in the U.K. It's £18 month. Why not just extend that to digital showings? Oh that's right, because they cinemas would complain they aren't extorting people for money when they buys drinks or popcorn.

They aren't extorting people. The theater makes very little money on the movie tickets sold and has to make a large majority of their profits with concession sales.
Score: 17 Votes (Like | Disagree)
Read All Comments

Friday May 7, 2021 1:51 am PDT by Tim Hardwick
An early look at an ongoing analysis of Apple's App Tracking Transparency suggests that the vast majority of iPhone users are leaving app tracking disabled since the feature went live on April 26 with the release of iOS 14.5. According to the latest data from analytics firm Flurry, just 4% of iPhone users in the U.S. have actively chosen to opt into app tracking after updating their device...
Read Full Article • 176 comments