Disney plans to pull all of its movies from Netflix as it prepares to launch its own streaming services, the company said in its latest earnings report (via CNBC.)

Then, in 2019, Disney will launch a Disney-branded direct-to-consumer streaming service that offers Disney content. 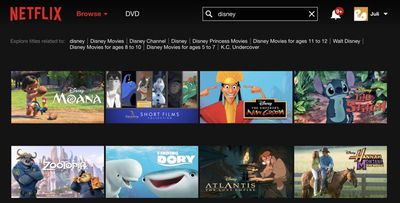 It's not clear when Disney plans to remove its content from Netflix, but in 2012, the two companies inked a deal that saw Netflix getting exclusive access to Disney, Marvel, Lucasfilm, and Pixar films. Currently, there are dozens of Disney movies available on Netflix, like The Chronicles of Narnia, Moana, Zootopia, Finding Dory, The Jungle Book, Pirates of the Caribbean, and more.

The deal, though initiated in 2012, didn't fully go into effect until 2016, so Netflix has only had access to a wide range of Disney content for under a year.

With its huge range of content, Disney stands to become a major competitor to existing streaming services like Netflix and Hulu, and for Apple, this essentially means that if the company ever does manage to launch a streaming service, it may not be able to include any Disney content.

jgelin
Fragmentation will be the death of this.
Eventually consumers just wont have the money to keep adding a monthly subscription service.
Score: 94 Votes (Like | Disagree)

eatrains
Well, everyone wanted to pay for channels a la carte. Now you can.
Score: 46 Votes (Like | Disagree)

EliasM
I don't get tv and film streaming. Why can't it be like music streaming where you can (in many cases) find the same songs on different platforms? This is most annoying and is forcing people to pay for more subscriptions than would be ideal.
Score: 37 Votes (Like | Disagree)

iVoid
Sigh... this is why I dropped Netflix and don't subscribe to other streaming services: It's very hard to know what's available where.

It's getting to the point where pirating movies is looking attractive again. :) :p
Score: 32 Votes (Like | Disagree)

Fragmentation will be the death of this.
Eventually consumers just wont have the money to keep adding a monthly subscription service.

Precisely. Many people used the logic "I can get Netflix for $7.99 a month, I don't need cable for $50 a month" ... and now people are finding by the time they subscribe to DirecTVnow, Netflix, and the ala carte stuff they want to add, they're back up spending the $$$ they initially wanted to get away from spending. LOL
Score: 31 Votes (Like | Disagree)
Read All Comments