Security camera company Canary recently announced a trio of new features coming to its smart home security system and mobile apps, including two-way audio calls between a Canary camera and smartphone, a live security feed with reduced latency, and an all-new web app with live streaming.

Rolling out over the course of this week is a refreshed version of Canary's "Watch Live" feature, which "dramatically" reduces the latency of live videos being recorded by the Canary camera. The company said it's done away with a five second delay previously found in Watch Live, allowing users a "virtually real-time" look into their home while watching on an iOS or Android device. 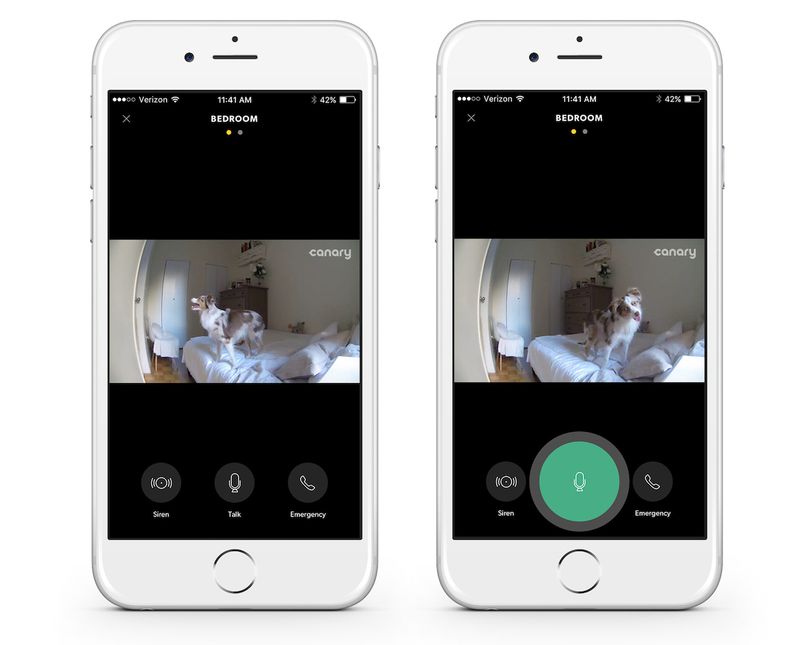 Prior to the release of 2.7.0, you may have experienced a delay of about 5 seconds between what you saw in the Canary app and the activity that was actually occurring in an environment. With the new and improved Watch Live experience, latency has decreased, giving you a virtually real-time view into your home.

To achieve this, we completely redesigned the backend of Watch Live to prioritize real-time video delivery. By implementing a dedicated video pipeline, and adding adaptive video quality to the Watch Live experience, we were able to make Watch Live truly live.

Canary also announced a user-requested feature that enables two-way audio calls between the security camera in a home, and a user with a smartphone outside of the home. Called "Canary Talk," the company described the feature as a home intercom, allowing users to simply tap a microphone button when in Watch Live to have their voice broadcast to anyone in the vicinity of their Canary. At-home users can then respond to the call by simply talking anywhere near the Canary.


Canary Talk will be available in the new version update 2.7.0 on the company's iOS and Android apps, but will debut first in the Canary All-in-One device, then launch sometime in September for Canary Flex devices. No matter which Canary it's used on, Canary Talk will require the company's $9.99/month subscription membership.

Whether you’re using it to talk to the kids, a nanny, an aging parent, your new puppy, or to ward off an intruder, Canary Talk gives you a voice at home no matter how far from it you are.

Additionally, any Canary membership users can now stream live video and view recorded content from their camera while on a desktop or mobile browser. The company said that the introduction of its new live-streaming web app will help Canary users watch their home while they are at work, without needing to bring up their smartphone.

The 2.7.0 update for Canary is available to download now on the iOS App Store. [Direct Link]

arggg14
I'm a fan of this system, but I do remember them promising HomeKit support almost a year ago...
Rating: 3 Votes

bigchrisfgb
What's with the Canary tweet? Get rid of it and you could easily disturb intruders by making you think you are already there.
Rating: 1 Votes