Twelve South today announced the release of its BookBook case for all 12-inch MacBook and 2016 and later MacBook Pro models. 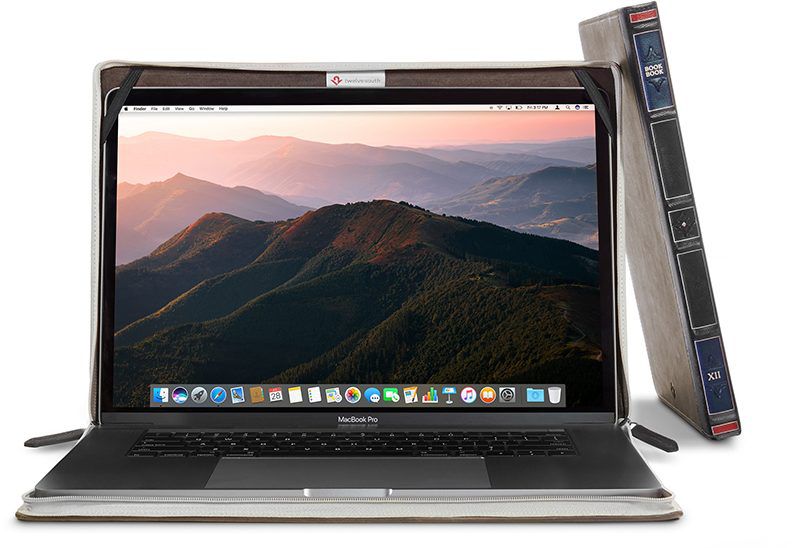 BookBook essentially disguises a MacBook or MacBook Pro as a vintage hardback book, while protecting the notebook with reinforced corners and a new, stronger crush-resistant spine. The outside is crafted from premium oil-pull up leather, while the inside is lined with a velvety soft microfiber material.

The new BookBook has a hidden compartment for hiding a few documents below the MacBook. BookBook also has two elastic bands on the inside cover of the case, which can be slipped over the corners of the MacBook's screen. Then, when the BookBook is opened, the MacBook screen will open too.

BookBook, one of the more popular MacBook cases over the past six years, is available now on Twelve South's website. It costs $79.99 for all 12-inch MacBook and 2016 and later MacBook Pro models with free U.S. shipping available. BookBook remains available for other MacBook Pro and MacBook Air models as well.

Heartofgoldilocks
Now all you need is a mac with OS X on it and you'll have a skeumorphism inside a skeumorphism and then The ghost of Scott forestall will appear and say with your powers combined I am Captain Planet!
Rating: 5 Votes

576316
Does anyone else find these cases just a bit ugly and novelty?
Rating: 3 Votes

applesith
Looks really ugly, bulky and cumbersome to use. I'm not a fan of cases with diagonal bands to hold in.
Rating: 3 Votes

spiderman0616
I can't decide what I think about these types of cases. I feel like they're a bit silly--nobody carries books around like that any more, so you're not necessarily disguising the fact that you probably have a gadget in there. More likely you're drawing attention to it, which I guess is the point.
[doublepost=1501601736][/doublepost]

Looks really ugly, bulky and cumbersome to use. I'm not a fan of cases with diagonal bands to hold in.

Right there with you--I don't like the idea of those bands rubbing around on the screen, or on the palm rests when closed for that matter. I am a firm believer in not having to get a protective skin to protect my device from the case that it's already in.
Rating: 3 Votes

waigx
TwelveSouth typically makes quality products and I have 4 of them from 2012 (2 BookArc, BookBook for iPhone, Hoverbar).

I considered the previous generation and my concern was the metal zipper head. I read form amazon that could chip off the corner of the MacBook ('https://www.amazon.com/gp/customer-reviews/R1L1CIXDYGAENE/ref=cm_cr_dp_d_rvw_btm?ie=UTF8&ASIN=B00B72DNEU#wasThisHelpful')
Not sure if this is still true for vol. 2.

(The picture is from Amazon reviewer) 
Before someone else asks, "What's a backpack?" here are all twelvesouth products.

Unfortunately it's measured to fit the MacBooks perfectly so it won't work with a shell case on the MacBook. It will be just slightly too tight.


I use a snap-on shell with the Gmyle case and it works fine. I did that previously with my bookbooks, but good for them if they have a closer fit.

I wonder if my MBP with a shell on it will fit into this case, added protection when traveling is always nice.


Unfortunately it's measured to fit the MacBooks perfectly so it won't work with a shell case on the MacBook. It will be just slightly too tight.
Rating: 1 Votes

lingenfr
I have been a twelvesouth customer for years and owned several bookbooks. I also own a hi-rise, several backpacks, a magic bar, etc. While their prices are high, the quality is good. I had several bookbooks for my 11" MBA and they were great. The one for my 13" MBPR was a poorer fit and they jacked around for quite some time after the release before they offered a case. I've contacted them several times since I got the new 13" MBP and essentially got a "let them eat cake" kind of answer. I put up with their high prices and lack of candor as long as I can buy the product I need when I need it. This latest BS got me off their bandwagon. I bought the Gmyle ('https://smile.amazon.com/gp/product/B01N4GH0E9/ref=oh_aui_search_detailpage?ie=UTF8&psc=1') case, which is not quite so stylish, but they are smart enough to use clear plastic to hold the screen rather than elastic. The fit is as good as any twelvesouth case I have owned (or better). Before anyone starts with their uninformed speculation, I have used it every day for months. There are no heat issues, the zipper doesn't scratch, <insert whatever other crap you can come up with>... Also, the material allows me to set the case on my hi-rise without ruining the finish. Setting a bookbook on a hi-rise will ruin the finish in a way that is almost impossible to repair. I hope twelvesouth pulls their head of their arse and figures out that their strategy based on their business needs should consider their customers needs as well.
Rating: 1 Votes

Saipher
I'm not sure about using a MacBook while on this case. I feel like things could get toasty pretty quickly. Maybe just use it as a carrying case? Other than that, it looks pretty cool!
Rating: 1 Votes