In the continued release of Apple news originating from developers digging through HomePod firmware, we now have some of the first user interface sounds that HomePod users could be hearing once the smart home speaker launches this December. 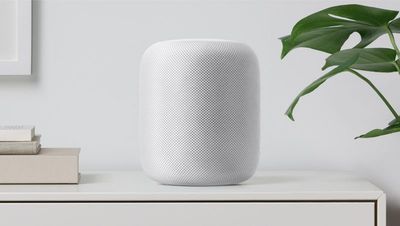 Developer Avery Magnotti discovered the sounds within a file named "audioOS" of the HomePod firmware that Apple released this past weekend. In order of appearance in the file, the sounds are called:

To hear what the files sound like, Magnotti posted a video on his YouTube channel, sharing samples of each file listed. Alarm1 and Timer1 sound like simple tones that HomePod users might be able to choose from when setting up timers in their kitchens. The rest are a bit more unclear, although each Setup file is likely related to the initial pairing process of HomePod and a user's iPhone.
HomePod firmware-related reveals have been steadily rolling out since Saturday, revealing the general design of the iPhone 8, referencing a "split" status bar, including potential new Apple Watch skiing workouts, and more. Magnotti himself revealed yesterday that the HomePod's Siri display measures in at 272 x 340.

The reason that there are so many iPhone and Apple Watch bits of news coming out of the new HomePod firmware is because Apple's smart speaker will run on a modified version of iOS when it launches, and the firmware being investigated by developers relates to iOS 11.0.2. Apple announced the HomePod at WWDC this year, and it will launch this December for $349.

AngerDanger
Judging by the sounds alone, it seems Apple managed to make a cylindrical Wii.

Michaelgtrusa
They sound nice to me.
Score: 13 Votes (Like | Disagree)

Stupid product... can't see the screen unless you are standing over it. What kind of an idiotic design is this?

Can't tell if you are being serious or not. There is no screen to look at. It's a speaker. The top is just fancy indicator light like what Google Home and Amazon Echo. Want to look at something? That is what your Phone/Watch/Tablet is for.
Score: 12 Votes (Like | Disagree)

Vanilla35
Sounds a little childish to me
Score: 10 Votes (Like | Disagree)

blcamp
I have to imagine a few high-ranking folks in Cupertino are super pissed about all this information flowing so freely.
Score: 9 Votes (Like | Disagree)

Judging by the sounds alone, it seems Apple managed to make a cylindrical Wii.

Soon to be followed by the HomePod Balance Board and the HomePod Plus controller.
Score: 7 Votes (Like | Disagree)
Read All Comments