Though Apple's HomePod speaker won't launch until December, Apple on Friday released firmware for the device, allowing developers to glean information both about the speaker itself and the upcoming iPhone 8 by digging into the code.

According to the latest revelation, shared on Twitter by Avery Magnotti, the screen of the HomePod that's used to display a visible multicolor LED waveform when interacting with Siri measures in at 272 x 340. 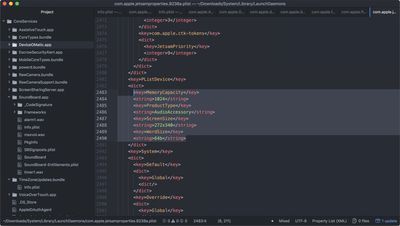 The display blends in seamlessly with the top of the device and is primarily dedicated to making it clear when Siri is listening to a command, but it also includes virtual buttons for activating Siri and controlling speaker volume. Based on previous leaks, the screen could also display other shapes or symbols, but its full functionality isn't yet known.

Along with the dimensions of the display, the information leaked today suggests the HomePod is equipped with 1GB RAM, equivalent to the amount of RAM in older iOS devices. HomePod also includes an A8 chip, and combined with the RAM, it's more powerful than competing smart speakers, enabling features like spatial awareness, Siri interactivity, and impressive sound.

As we learned over the weekend, HomePod will run a full version of iOS and can be equated to an iPhone without a screen. It will use a shell app called "SoundBoard" to integrate with the hardware built into the device, and it will include Accessibility features like VoiceOver.

HomePod is priced at $349 and will be available for purchase in December.

LordQ
Looking forward to a HomePod if it does not require Apple Music.
Score: 23 Votes (Like | Disagree)

Relentless Power
I honestly can't wait to purchase the HomePod and I think it's going to set the bar. I think this is going to be one the biggest releases for 2017 next to the iPhone.
Score: 21 Votes (Like | Disagree)

r03dz
Siri support only for Apple Music is still suicidal for a speaker.
Score: 19 Votes (Like | Disagree)

zahuh
I’ll wait for the thinner HomePod 2 with 4gb of ram and a retina display lol
Score: 14 Votes (Like | Disagree)

RadioGaGa1984
You had me at Siri
Score: 8 Votes (Like | Disagree)
Read All Comments