Apple has updated its online store to indicate that 15-inch MacBook Pro orders placed today are now estimated for free delivery between June 6-8 in the United States, coinciding with its Worldwide Developers Conference next week. 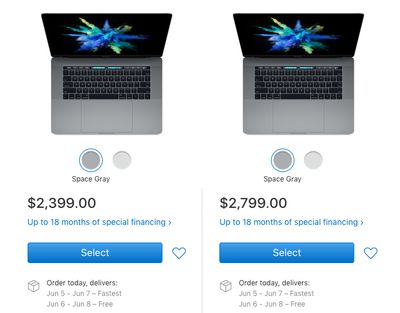 The delivery estimates lend credence to a report claiming Apple plans to announce new MacBook Pro and 12-inch MacBook models at the WWDC keynote on June 5. The notebooks are expected to receive internal improvements only, including an upgrade to Intel's faster Kaby Lake processors.

13-inch MacBook Pro models remain in stock for delivery as early as tomorrow in the United States and several other countries. It's unclear if that's because Apple plans to refresh only the 15-inch MacBook Pro next week, or if supplies of the 13-inch models are simply more plentiful ahead of WWDC.

Kaby Lake processors appropriate for a 13-inch MacBook Pro appear to be readily available, so a refresh shouldn't be ruled out.

Apple last refreshed the MacBook Pro in October 2016, after the notebook went 527 days without being updated. In contrast, only 220 days will have passed if Apple launches new MacBook Pro models on June 5, below the average timeframe of 320 days between any two MacBook Pro generations.

joshwenke
Apple, please amaze me... or you'll be amazed by how fast I stop supporting you guys. I've been barely holding on for too long, this is your last shot.
Score: 73 Votes (Like | Disagree)

... that's weird. i thought that macbook is selling so INCREDIBLY well, why does it need an update after such a short period of time? ;-)

Stella
Reduce the price and include a more powerful GPU!
Score: 42 Votes (Like | Disagree)

Im gonna say it...but I have to say it....
I JUST SPENT 4 THOUSAND DOLLARS ON A TOP OF THE LINE VERSION OF THIS MACBOOK TWO MONTHS AGO!
AND IT GETS DEVALUED ALREADY?!?!?!?!