Apple today announced the all-new MacBook Pro, confirming that the new computer will come in 13-inch and 15-inch sizes, in both Silver and Space Gray color options. The MacBooks are thinner and lighter than their previous generations, come with a Trackpad that's larger than the ones on the previous MacBooks, and have a redesigned keyboard for better typing. 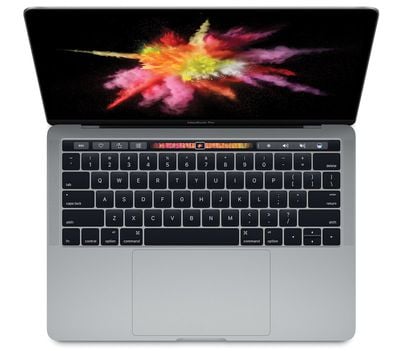 The 15-inch MacBook Pro features Radeon Pro discrete graphics, while the 13-inch model has Intel Iris Graphics. Each edition includes SSDs with sequential read speeds over 3GBps, and the ability to drive a 5K display through a single Thunderbolt 3 port thanks to the technology's consolidation of data transfer, video bandwidth, and charging abilities.

For the display, that means Apple has created "the brightest, most colorful notebook display" ever, with images that are more vivid and lifelike thanks to the screen's 500 nits of brightness. In total, that means the new screen is now 67 percent brighter than the previous generation MacBook Pro, has 67 percent more contrast, "and is the first Mac notebook display to support a wider color gamut." The company said that none of this negatively affects battery life, because with power saving technology in the MacBook -- including a larger pixel aperture, a variable refresh rate and more power-efficient LEDs -- the display now consumes 30 percent less energy.

“This week marks the 25th anniversary of Apple’s first notebook; through the years each generation has introduced new innovations and capabilities, and it’s fitting that this all-new generation of MacBook Pro is the biggest leap forward yet,” said Philip Schiller, Apple’s senior vice president of Worldwide Marketing.

“With the groundbreaking new Touch Bar, the convenience of Touch ID, the best Mac display ever, powerful performance, improved audio, blazing fast storage and Thunderbolt 3 connectivity in our thinnest and lightest pro notebook yet, the new MacBook Pro is the most advanced notebook ever made.”

Regarding ports, the MacBook Pro now has four Thunderbolt 3 ports, any of which can be used to charge the laptop, and Apple has officially done away with MagSafe charging on its MacBook Pro line. The enclosure of the MacBook features an entirely new design and all-metal unibody construction, and the 13-inch model is 14.9 mm thin while the 15-inch option is 15.5 mm thin.

In comparison to the last edition of the MacBook Pro, the 13-inch model is 17 percent thinner and has 23 percent less volume, while the 15-inch is 14 percent thinner and 20 percent less volume. In terms of weight, the 13-inch is 3 pounds and the 15-inch is 4 pounds, both devices coming in at nearly half a pound lighter than their previous iterations.


Of course, the biggest addition to the MacBook Pro is the new "Touch Bar," which sits atop the keyboard and officially replaces the function keys on the laptop. As was rumored, Touch Bar is application specific and adapts to what's on screen, be it scrolling through months in Calendar, choosing an album in Photos, selecting emoji in Messages, and many more, including third-party apps like Microsoft Office.

Another advantage is Touch ID, which comes integrated into the power button on the new MacBook Pro. Once a user enrolls their fingerprint into the Touch ID system on MacBook, they can unlock the computer with the simple press of a finger, switch user accounts, and even make purchases with Apple Pay's new integration on the web.

A second generation butterfly mechanism in the keyboard provides more responsive typing. Below the keyboard, Apple expanded the Trackpad to be 50 percent larger in the 13-inch MacBook Pro, and twice as large than previous models on the 15-inch MacBook Pro. The speakers got an overhaul, too, with louder, more true-to-life sound that have double the dynamic range and improved bass.

The 13-inch MacBook Pro starts at $1,799, while the 15-inch starts at $2,399, and both devices can be pre-ordered today with a shipping date of 2-3 weeks. Apple has also decided to not create a new "Air" model, instead introducing an entry-level MacBook Pro without a Touch Bar that begins at $1,499, and it's on sale now on Apple.com.

You'll have to take your eyes of the screen so often to look down at it that it's less efficient.

I'm actually a little bummed about it to be honest.
Score: 68 Votes (Like | Disagree)

netsped
I'm calling it now. Touch Bar seems to be the least great feature ever on a Macbook.

You have a big, retina display and a 2x larger trackpad but now just use this tiny screen on the top of the keyboard.

Who uses a trackpad or mouse, ugh.
Score: 64 Votes (Like | Disagree)

DataChris
Audio Ports!?! F'n Hell Apple. Now I have to carry one set of lightning headphones for my iPhone7 and a separate pair of analog or usbC headphones just for my mac?! Such a fail! :mad:
Score: 63 Votes (Like | Disagree)

netsped
Those prices though... wtf.
Score: 56 Votes (Like | Disagree)
Read All Comments