A collection of new images today claim to show cases for Apple's upcoming 10.5-inch and 12.9-inch iPad Pro devices. The 10.5-inch iPad Pro is believed to be an update similar in vein to the iPhone 8, with a size that remains close to that of the 9.7-inch iPad Pro, but includes a larger 10.5-inch display thanks to shrinking bezels. 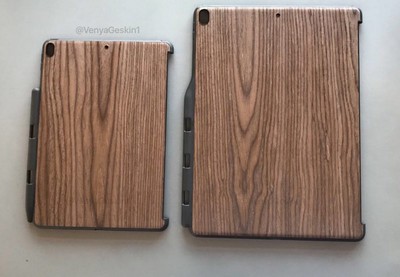 Benjamin Geskin has shared the iPad Pro accessory images on Twitter today, showing off cutouts for the Lightning port, speaker grilles, microphone, and vertically-aligned camera. The microphone cutout is placed on the top rear of both new iPads, similar to its location on the newest 9.7-inch iPad. For the current 12.9-inch models, however, the microphone cutout sits on the right side of the iPad, above the volume buttons.

The cases include multiple large cutouts for what appears to be four speakers, with two on top of the case and two on the bottom surrounding the Lightning port. This suggests that the 10.5-inch iPad is likely to continue supporting the stereo audio system of the iPhone 7 and 9.7-inch iPad Pro update. The wood cases also include side inserts for Apple Pencil storage.

Also on top of the case is the expected cutout for the lock button, and the 3.5mm headphone jack will still be included on the 10.5-inch and 12.9-inch iPad Pros launching this year, according to the new cases. Volume rockers remain on the traditional right side of the iPad cases, as well.

With production on the 10.5-inch iPad reportedly ramping up, the device could debut as early as WWDC, which takes place two weeks from today. For the smaller-screened iPad mini, recent rumors have suggested that Apple might discontinue the devices due to likely cannibalization from the 5.5-inch iPhone Plus devices. According to Geskin, the iPad mini will remain off of Apple's update list -- for 2017 at least -- with his Tweet stating, "No new iPad mini this year."

NachoGrande
And the award for the ugliest case goes to.....
Score: 8 Votes (Like | Disagree)

JonneyGee
The iPad Mini news isn't surprising but it sure is frustrating. Come on, Apple — some of us like portable devices that are actually portable. :oops:
Score: 6 Votes (Like | Disagree)

Mr. Dee
Nice, I am planning to buy my first next year, a 12 inch iPad Pro. Hope it includes features such as 3D Touch, True Tone and a optimized iOS for the large screen, accessible file system, even if its integrated with iCloud.
Score: 5 Votes (Like | Disagree)

recoil80
That's a replacement for the 9.7'' iPad pro, similar size, similar features.
I wish they'd keep updating the mini, a 5.5'' iPhone is not a replacement for an iPad. When used in landscape the mini has way more vertical real estate for apps, is not the same user experience. Even with a 5.8'' future iPhone landscape mode wouldn't be as good as on the iPad.
Score: 5 Votes (Like | Disagree)

If they'll discontinue the 7.9" form factor, no more iPads for me!

Why not Apple discontinue the 9.7 ipad as it will be similar to 10.5 form factor, and keep iPad mini alive for those who don't need bigger iPads
Score: 5 Votes (Like | Disagree)
Read All Comments