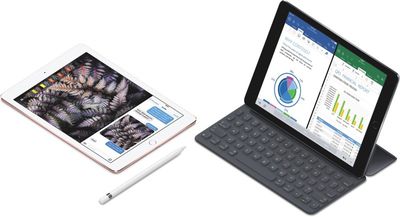 "iPad Pro is a new generation of iPad that is indispensable and immersive, enabling people to be more productive and more creative. It's incredibly fast, extremely portable, and completely natural to use with your fingers, Apple Pencil and Smart Keyboard. And now it comes in two sizes," said Philip Schiller, Apple's senior vice president of Worldwide Marketing. "The 9.7-inch iPad Pro has a new Retina display with True Tone technology, four-speaker audio system, blazing fast A9X chip, 12-megapixel iSight camera, 5-megapixel FaceTime HD camera, faster wireless, and support for Apple Pencil and Smart Keyboard. It is the ultimate upgrade for existing iPad users and replacement for PC users."

Unique to the 9.7-inch iPad Pro is a True Tone display that uses four-channel ambient light sensors to measure the color temperature of the ambient environment, changing the temperature of the tablet's display to match. The feature goes hand-in-hand with Night Shift, the blue light reduction mode in iOS 9.3.

Measuring in at 6.1mm, the 9.7-inch iPad Pro weighs less than a pound. Design wise, it looks like a smaller 12.9-inch iPad Pro, with four speakers for improved audio and a Smart Connector for use with accessories like the new Smart Keyboard. Inside, there's an A9X chip that offers incredible performance and a long battery life, plus there's support for 802.11ac Wi-Fi With MIMO technology, faster LTE advanced, and the Apple SIM to connect to LTE networks while traveling.

The 9.7-inch iPad Pro has an improved 12-megapixel camera, with Focus Pixels for faster focusing, a better image signal processor, advanced noise reduction, and better face detection. It's the same camera used in the iPhone 6s and the iPhone 6s Plus, with support for 5K video, 63-megapixel panoramas, and Live Photos. There's also a rear-facing flash, the first flash included in an iPad. Apple has also improved the front-facing camera, introducing a 5-megapixel FaceTime HD camera with a front-facing Retina Flash feature.

The 9.7-inch iPad Pro will be available to order beginning Thursday, March 24, from Apple.com, and in Apple's retail stores, through select carriers and Apple Authorized Resellers on Thursday, March 31, in Australia, Canada, China (Wi-Fi models only), France, Germany, Hong Kong, Japan, New Zealand, Puerto Rico, Singapore, the UK, US Virgin Islands and the US.

The Apple Pencil for the 9.7-inch iPad Pro continues to be available for $99. The Smart Keyboard designed for the smaller tablet is priced at $149.

saintforlife
This really is an iPad Air 3. The Pro moniker just carries a $100 premium for no good reason.
Score: 36 Votes (Like | Disagree)

I wonder how that will affect laying the iPad on a flat surface and drawing/writing on it. #wobblegate
Score: 28 Votes (Like | Disagree)

Sirious
I think they should have stuck with the 'Air' naming - even if it is very similar to the 12.9 inch Pro...
Score: 22 Votes (Like | Disagree)
Read All Comments