A rare working Apple-1 computer that was built in Steve Jobs' garage has been sold at auction in Germany for over $130,000 (via news24).

The highly sought-after vintage computer auctioned off in Cologne on Saturday was one of just 200 that the late Apple co-founder and Steve Wozniak designed and marketed in 1976. 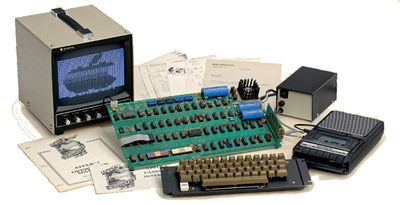 The owner John Dryden, a Californian software engineer, admitted that finally parting with the machine was difficult. "(The Apple 1) was one of the first opportunities for someone to possess a real computer," he said. "I'd been working with computers for a while but they were huge."

The Apple-1 was sold with the original receipt for the motherboard and cassette recorder, an operating manual, and even notes of telephone conversations between Dryden and Wozniak from 1977. Apple never offered an external housing for the computer, while the power supply, keyboard, monitor, and cassette recorder had to be obtained separately by the owner.

This machine was actually expected to fetch significantly more than it did this weekend, after an Apple-1 sold for a record $905,000 at a Bonhams auction in New York in October 2014. More recently, a unique "celebration" model went for $815,000 at a CharityBuzz auction in August of last year.


Breker's auction house, which hosted the sale and specializes in technical antiques, put the lower price down to a settling of Apple "hype", now coming over five years after the death of Steve Jobs. The winning bidder was a German engineer who collects old computers.

The 8K machine, which originally sold for $666 over 40 years ago, is one of just eight still in working order. There are thought to be only around 50 to 60 Apple-1 computers still in existence.

keysofanxiety
Ugh, wish Apple would bring back true upgradability on their products again.

It's not a Pro product unless you can solder your own capacitors onto it. This wouldn't be happening if Woz was still here.
Score: 8 Votes (Like | Disagree)

It's not a Pro product unless you can solder your own capacitors onto it. This wouldn't be happening if Woz was still here.

Pretty on point, actually. ;) Jobs ideal was a computing device as an appliance, with no way to open it or change it. But he was constantly pushing for making great devices, constantly dissatisfied with what could be cobbled together with existing parts (so we benefit from him pushing his designers and engineers to try all sort of new things and invent new technologies). Woz was a hacker* extraordinaire, who could make simple parts do amazing things (the Apple II Disk Controller was a revolutionarily simple design that had many advantages over existing more complicated/expensive designs), and he encouraged others to do the same.

*: (from back when hacker meant "adept at delving into existing systems, understanding how they work, modifying them to do new interesting stuff, and using the knowledge gained to make entirely new things" - sigh, someone broke into a computer, someone else commented that "a hacker did it", and some reporter heard and either misunderstood or just intentionally misused the term because it sounded catchy, and now "hacker" means "computer criminal" to most people).

Interesting though, there are purportedly less than 60 in existence.

I thought I recalled the original production being in the neighborhood of 200, though I could be wrong.

$666-the price point devised by a couple of high California kids lol.

Devised by a couple of counter-culture revolutionaries, who found it entertaining and thought others of like mind would too. The competition at the time was CP/M running on S-100 bus 8080 systems (displaying on monochrome text-only terminals) that were really intended for business use. At the time, computers were basically only used by large companies - Steve & Steve had a dream of making computers that everyone could use (power to the people) - that was the revolution they were trying to foment. Indeed, Apple's follow-on machine, the Apple II, was on the market months before the (monochrome-only) TRS-80 and Commodore PET, years before the Atari 400/800, and many years before the first IBM PC. At the time it kind of was revolutionary.

And, in some ways, the computer today that most closely matches Steve Jobs' ideal, what he thought computers should be, is the iPad.
Score: 5 Votes (Like | Disagree)

BruceEBonus
I am waiting til September when they bring out the Apple 1S. I like Apple retro phones/iPads/Macs with the "less is more" adage but when it comes to classics like this I'll wait till it comes with a 16k version and faster cassette player. o_O
Score: 3 Votes (Like | Disagree)

Ugh, wish Apple would bring back true upgradability on their products again.

It's not a Pro product unless you can solder your own capacitors onto it. This wouldn't be happening if Woz was still here.

Woz probably has a dozen of these in his garage and doesn't even know it.

Interesting though, there are purportedly less than 60 in existence.
Score: 2 Votes (Like | Disagree)

Love the early macs, so much involvement from the community and upgrading .....ahhh upgrading and thnkering, what I hate the most about the current dumb machines .....
Score: 2 Votes (Like | Disagree)

$666-the price point devised by a couple of high California kids lol.