A rare "Celebration" Apple-1 computer has fetched $815,000 in an auction hosted by charity auction site CharityBuzz, one of the highest prices an Apple-1 has sold for at auction. During the final minutes of the auction, bids reached $1.2 million, but it appears the last bid was pulled just seconds before the auction ended. 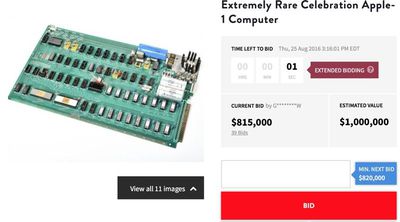 The "Celebration" Apple-1, so named by computer historian Corey Cohen, features a blank "green" PCB board that was never sold to the public and was not a part of a known production run.

Unlike other Apple-1 computers that have fetched lower prices, the Celebration Apple-1 is not in working condition but could be restored to full functionality with minor tweaks. Cohen recommended against such restoration to preserve the board's uniqueness. "The Apple-1 board is a not just a piece of history, but a piece of art," he said.

Steve Jobs and Steve Wozniak originally created and sold 175 Apple-1 computers during the summer of 1976, marking the launch of Apple computer, a company that's grown to be one of the largest and most influential in the world. Of those 175 machines, only 60 or so are still in existence, making them quite valuable to collectors.

10 percent of the proceeds from the CharityBuzz auction will benefit the Leukemia and Lymphoma Society.

SandboxGeneral
Whew! That's a load of money right there. I can't say that if I had that kind of cash (or credit) that I'd use it to buy something like this. But if the new owner is happy with it, that's what counts!

Also great that 10% of the sale is going to benefit a good charity.
Score: 3 Votes (Like | Disagree)

Cool, a printed circuit board board. Now that's rare.
Score: 3 Votes (Like | Disagree)

thisisnotmyname
I wonder if the shenanigans of pulling the large bid in the final seconds affected the final price it would have otherwise gone for. For example, someone placing that $1.2MM bid may have pushed out bidders that would have payed $900k+ and then didn't have time to bid after the withdrawal.

OK, I'll take the tinfoil off my head now.
Score: 3 Votes (Like | Disagree)
Read All Comments