A rare working Apple 1 computer has sold for a record $905,000 at a Bonhams auction in New York, reports Reuters. Estimates suggested the motherboard might fetch between $300,000 and $500,000, but it ended up selling for far more. 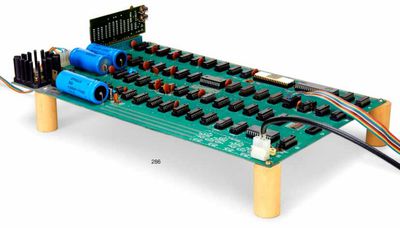 The motherboard is believed to be one of approximately 50 Apple 1 computers that were originally constructed by Apple co-founder Steve Wozniak in Steve Jobs' garage for sale in The Byte Shop. The motherboard is numbered "01-0070."


Few Apple 1 computers survive today, and the one sold at the New York auction has fetched the highest price seen yet. The buyer of the computer remains unknown. Each Apple 1 originally sold for $666.66, and approximately 200 total units were produced.

Last year, two working Apple 1 computers complete with their original cardboard box were sold by German auction house Breker. One of the machines sold for $330,000, while a second fully functional Apple 1 computer sold for $671,400 as it included a letter from Steve Jobs intended for its original owner.

Update: Reuters has updated its article to note that the winning bidder was the Henry Ford Museum.

scott911
none of those chips are soldered in - it's no wonder that it costs nearly a million.
Score: 11 Votes (Like | Disagree)

mpavilion
The buyer should have waited for the Apple 1S, amirite?
Score: 5 Votes (Like | Disagree)

X38
Wow! With that kind of profit margin, Apple should seriously consider bringing it back into production.
;-)
Score: 4 Votes (Like | Disagree)

How much for a first model of a windows pc? (Assuming a working one still exist) lol

Nothing from IBM's computing history would come close to an Apple 1 in rarity or status.

There are plenty of original IBM PCs (model 5150) in service today. Mostly by collectors, but some in actual daily use as computers. I know a small company that still uses one to run their payroll. Because it does exactly what it needs to do, they don't see any reason to stop using it.

The HP-01 (https://en.wikipedia.org/wiki/HP-01) calculator watch might be a close equivalent - a "first of its kind" product with low production numbers. Although much more common than an Apple 1, they do sell for a few thousand dollars when they pop up.

ffs. Not much else to say


You spent money on a device you used to type that - when there are starving children around the world that your money could have fed.

What a disgusting display of conspicuous consumption.

People are free to spend their money on whatever they want. Many of the ultra-rich give a higher percentage of their income and wealth to charities than many of the middle class.
Score: 4 Votes (Like | Disagree)

Nice investment had you purchased one when Jobs sold them.


Apple stock was a better investment. Those of us that bought back when it was less than $5 a share made many times the return of buying and selling that Apple 1. :D
Score: 4 Votes (Like | Disagree)
Read All Comments