Apple CEO Tim Cook has allegedly been spotted testing a prototype glucose monitor that's connected to his Apple Watch, reports CNBC. Cook, who is said to be aiming to understand how his blood sugar is affected by food and exercise, has been seen wearing the device around the Apple Campus.

Cook also mentioned the glucose monitor in a February meeting with students at the University of Glasgow. It's not clear if the device he spoke of in Glasgow is the same one he's been wearing around the Apple campus.

"I've been wearing a continuous glucose monitor for a few weeks," he said. "I just took it off before coming on this trip."

Current continuous glucose monitoring systems require a small sensor that's worn under the skin to monitor glucose levels. Advanced systems from Dexcom include a transmitter, which can display glucose information directly on an iPhone or Apple Watch. 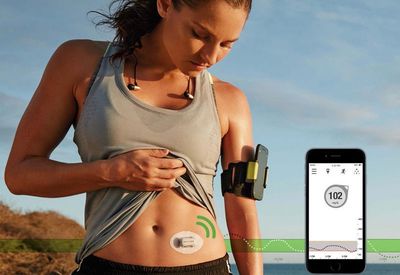 Apple's glucose testing is reportedly far enough along that the company has started conducting feasibility trials at clinical sites in the San Francisco Bay Area, and consultants have been hired to sort out regulatory issues.

According to a recent rumor from BGR, Apple could be planning to add a non-invasive glucose monitoring sensor to a future version of the Apple Watch, perhaps through the addition of a smart band that would add functionality to the Apple Watch without requiring the sensor to be built into the watch.

Cook has said in the past that Apple does not want to put the Apple Watch through the FDA approval process, something that would need to happen for Apple to introduce a glucose monitor, so a modular add-on smart band could be an ideal solution for adding more advanced health tracking features without subjecting the Apple Watch itself to FDA oversight.

barkomatic
Medical and fitness uses are still the best use cases for the Apple Watch. It would be wonderful if one day it could also reliably detect heart problems before a heart attack.
Score: 19 Votes (Like | Disagree)

itsmilo
So where them pics at if he was spotted with it
Score: 17 Votes (Like | Disagree)

Good guy Tim Cook and his glucose monitor. Glucose monitors are the next big thing (tm) and a must have if you want to be cool, just like good guy Cook. However, an alcohol level monitor would certainly be useful to more people, including hipsters.

BMcCoy
They may be trying to avoid FDA on the watch, but any glucose monitoring 'device', even if built within a strap, will need some serious regulatory approvals, trials and evidence before it could be used for medical purposes.

And I hope they're doing that, because this is really exciting.
Score: 14 Votes (Like | Disagree)

DragonRider
Take my money and I'll help test this!!!
Score: 9 Votes (Like | Disagree)

djcerla
This breakthrough will translate in hundreds of millions of Watches (and iPhones) sold.
Score: 8 Votes (Like | Disagree)
Read All Comments